No one fumbles around with the tree in a Green Bay Packer fan household. Diminutive though they may be, these little delights are like prize jewels of the family ornament collection. This roly-poly guy is a jingle bell decked out in Green and Gold and a football uniform. 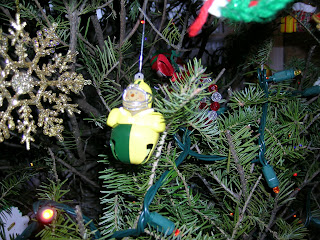 These two came from a student (oh, she knew me well). They look fragile, but they aren’t. You won’t see them on injured reserve. Tiny and shiny, the crystal snowmen are small enough to fit in a teacup, but they’re prettier near a string of lights that can reflect on their glory. 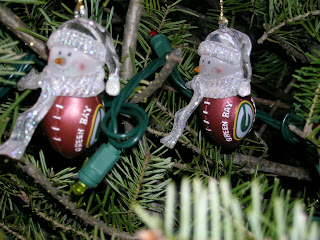 Sometimes the closed captioning is wrong, and it becomes humorous.

There is a media program for the folks who call a football game. It’s a team roster with phonetic pronunciation of the player’s names. Brian Bulaga, for example, is listed as Brian Bulaga (Boo’lahgah). Today’s play by play guy didn’t study the roster before the game. He called him Brian Beluga.

Readers, you’re way ahead of me, I’m sure. We turned it into song, of course. To the tune of Raffi’s Baby Beluga, I give you – Brian Beluga, from the O.K. Chorale.

Block so wild, and you block so free.

Snowfall above, and the turf below,

Just a green and gold guy on the go!

Brilliant, it’s not. Memorable, kinda maybe. But we do have fun watching football.

Husband and I have a different perspective on the Packers and their post-season. He’s a Packer fan in a way, but he looks at their success from a slightly different angle because he works in television.
Television news in a major NFL market is a whole different, well, ball game from working at a station with no football to cover. For him, an extended post-season is both a blessing and a curse. It means more work, and it means more work. More work means overtime, and more work means overtime. An extended season can also mean travel…unless the Pack manage to earn home field advantage.

Who cares? I hear you wail. To answer that question, I share the transcript of an Actual Conversation at the O.K. Chorale. The script is the type that gets repeated annually. This one is funny because the Super Bowl was in Arizona the year I first blogged the topic, just like the one coming up in early 2015.

Me: It’ll be great if they keep winning and get home field advantage through the playoffs.
Husband: No, no, n-n-n-n-n-no!
Me: What? I thought you’d like it because you wouldn’t have to travel!
Husband: I don’t want to work outside on the sidelines in the freezing cold!
Me: Okay, then you want (insert NFL team in southern U.S.) to win so that you can work a game in (insert warm locale), instead?
Husband: No, No, n-n-n-n-n-n-no!
Me (confused): Huh?
Husband: I have this fear that the news director is going to look at us engineers and say, ‘Erbert, Gerbert, load up the satellite truck and drive it down to (insert southern NFL market). and when they win? Turn right.’ I could be on the road for three weeks! (editor’s note: he said “IF they win.” I changed it.)
Me: Then you should cheer for the Packers to keep winning. They’ll earn home field advantage, and you won’t have to travel.
Husband: (speechless, waving arms in air)
Me: I suppose it’s a lose-lose situation for you.
Husband: Yes! Yes! Yes!

Everyday decor – I looked over this post and realized, as usual, that not much has changed since this piece first hit the Interwebs in 2011. Read on and find out what little did need updating.

Decor? Heck, this is just part of the household. Nothing is fancy. You know I hang green and gold ornaments on my Christmas tree. You know I sip coffee from a Lombardi mug that sits on a cheese coaster. With my Green Bay Packers and their winning streak in mind, let’s take a brief tour.
This title towel keeps my bread machine dust free in between uses. 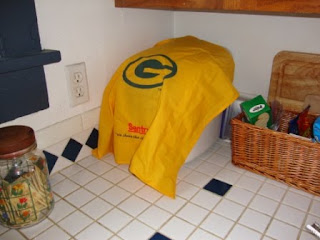 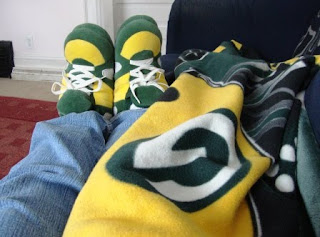 Let’s head upstairs.
In the bathroom, I can wash up with a classic and well-used Green Bay washcloth. 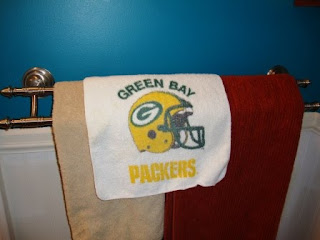 Tiny rabbit Krumpet used to live in Amigo’s room and hang out in a Green Bay Packers bean bag chair. Krumpet and La Petite now have their own apartment, but I still use this picture every September to show my students two important interests in my life: rabbits and the Green Bay Packers. 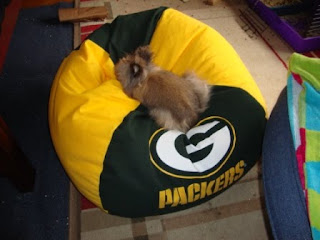 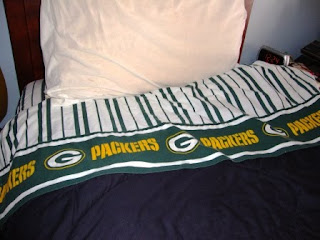 These are just a few examples of simple evidence that yes, we are true fans in this household. Any questions? There will be a quiz Sunday night. Or Monday – “we” play Atlanta on Monday Night Football. Peach cobbler for Eating the Opponent, anyone?

Well, teachers who are also Cheeseheads (Packers fans), that is. 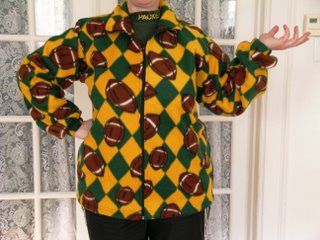 You might be a Green Bay Packer fan if you can dress like this for work, and not only is it considered completely appropriate, your boss compliments you on your new attire.

Ironic, isn’t it? I posted this several years ago. My boss at the time has been bumped up to an office in the same building in which my virtual school makes its “home”. My current cubicle is in a drafty part of an aging building, so the blanket style jacket is, well, perfect. The more things change, the more they stay the same – in Packers country, anyway.

There’s too much on my to-do list to allow a relaxed Sunday afternoon in front of the TV. But when you have green and gold running through your system the way we do at the O.K. Chorale, the game will be on and will be central to our existence for a few hours. We do a little multi-tasking, though, just to keep life from collapsing around us. For example:

Readers, can you add to the list? As the Packers keep winning, I want to watch every minute. But in reality, life intrudes. What other tasks can be multi-tasked during a Packer game?

You know you’re a Green Bay Packers fan if: 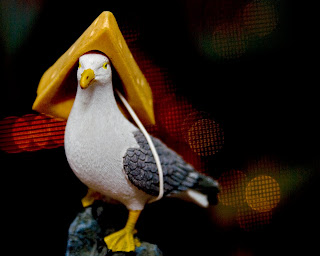 Readers, I’m looking at encore posts for a Throwback Thursday theme. Feel free to join me on your own blogs – or just stopping by to check on my Thursday posts. Regular readers might even say, “Hey, I read this the first time!”

For newcomers: We have a fun culinary tradition in our family. During the NFL season, we look at the Packers schedule, see who they are playing, and then plan to “eat the opponent” by serving local fare – the other team’s local fare. It’s a little tougher for our North Division opponents because our Packers face them twice every year – three times if it happens again in the playoffs.

The Minnesota Vikings are probably settling in for a nice long nap downtown in my fair city right now as I’m blogging. Consider the following: It’s about a 45 minute drive from our downtown to Lambeau Field, Green Bay hotels often fill up as soon as the schedule is released in the spring, and what opponent wants to stay in Packerland City surrounded by cheeseheads, anyway? The jokes on them, really. We have as high a percentage of Cheeseheads as Green Bay itself. But I was talking about food.

My go-to default for Minnesota games is wild rice. I can cook it as a side dish, stir it into a hotdish, or just about anything. Wild rice is delicious. When former Packer Brett Favre donned the dreaded purple and played for the Vikings, we served turnovers for breakfast. Long time fans will understand. This time around, I was searching. Simply making wild rice on the side didn’t feel like enough.

I did a quick Internet search for Minnesota game – hunting game, that is. I printed a list of game animals that are hunted in Minnesota, tucked the list in my purse, and headed to a nearby corner meat market. Everyone should have a corner meat market. It’s just an awesome little place. But I was talking about Minnesota.

I bought a pound of ground elk meat. It was pricey, but can you put a price on a Packer victory? Never mind. Don’t answer that. I pondered the possibilities, and by the time I pulled in the driveway (5 minutes later) I’d decided: Elk chili.

At this moment, while the Vikings are staying in a hotel with a restaurant called Vince Lombardi’s Steakhouse, I’ve browned the elk meat and I’m cooking a pan of home grown tomatoes for sauce. It’ll simmer in the crock pot all day long while I’m in school. If I do this Wisconsin style, Amigo will add noodles to it late in the afternoon. And there you have it: Eating the Opponent — Minnesota, with a Wisconsin twist.

I might just like La Petite’s suggestion the best. Keep the name, change the mascot to a potato.

But if the owner won’t put his money into spuds, he could try these suggestions, also from La Petite.

Meanwhile, whatever will we eat when the Packers formerly known as Acme play the renamed football club?

Well, readers, what do you think?

It was almost a year ago that madness and mayhem struck the O.K. Chorale. A skillful (not) subcontractor digging to make a new sidewalk hit the curbstop that takes water from the main pipe in the street to our home. He looked around to see if he’d been seen, plugged the marking stick back in the dirt, smoothed out his tracks, and went on working.

The short story is this: his action led to water saturating the ground, pouring into the basement, and the attempt at repair led to a broken gas pipe and evacuation from our home with my purse, phone, our prescription meds, and the clothes on our backs.

The latest reminder of The Disaster came in the form of a dozen roses. I know we own vases, I know they’re in the basement, but I couldn’t find them. Due to The Flood, everything got moved and rearranged in the basement. I said rearranged, not reorganized. We’re still working on that.

The result? Hey, we’re nothing if not resourceful. 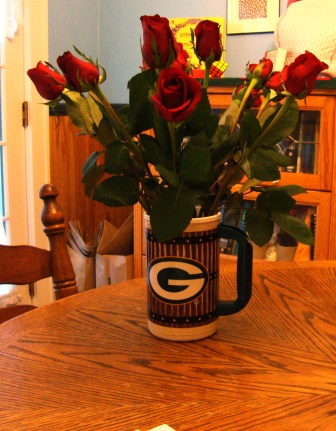