It’s bitter cold outside – below zero wind chills, day after day. I might as well stay indoors, curl up in a blanket, and watch the Harry Potter marathon on FreeForm. It’s fascinating to look over  the details – the foreshadowing, the creation of this amazing parallel world, J.K. Rowling’s craft as a writer. So despite the cold, I’ll stay warm and cozy. As my idol Albus Dumbledore once said, “…now, let us step out into the night and pursue that flighty temptress, adventure.”

This is an encore from a summer day several years ago as Amigo and I read the final book in the series: The Deathly Hallows. It is truly fascinating to reread and rewatch the Harry Potter series. I still wonder if I’m more like Professor MacGonagall or Professor Sprout.

Once in a while, the PR arm of our charter school calls on me to help publicize the school by writing a little something. This time around, it was all about keeping the learning going over winter break.

I feel strongly that breaks serve a purpose in schooling. Students, parent-learning coaches, teachers – all of us need a mental and physical break now and then. However, curious minds can keep on searching for new information and fascinating ideas.

So anyway, readers, family, friends, and internet acquaintances, here you have it: Daisy’s take on learning in winter. It starts, of course, with a literature reference. Enjoy!

I went to the post office one day to mail a book. The clerk was one who knew me as a regular, often mailing my Paperback Swap books on to another reader. As he went through the standard script and asked, “Does the package contain anything potentially hazardous?” I replied flippantly, “No, independent thought is still legal.”

He laughed, thank goodness. I can just see the post service suddenly searching my mail because of my slightly sarcastic sense of humor. Oops.

There have been a few changes since that day.

Independent thought may still be legal, but learning and thinking are less and less valuable to our government. In fact, the impression I get is that the current folks in charge want to keep the populace ignorant, malleable, and easy to control.

This is scary, people. Very scary. Dare I suggest – keep reading, keep learning, and keep connecting with your legislators. Remind them that they work for all of us, not just those who voted them into office. Call, email, send postcards, attend town hall meetings. If you dare, participate in rallies and protests.

Independent thought is still legal. Let’s keep it that way.

I’m making a serious effort to keep up with this de-cluttering project. I had a rough morning today, though. I decided to go through a box of books leftover from my classroom days. Classroom libraries are a source of joy and a major cost factor for most teachers. I managed to donate mine to a new teacher when I moved to teaching online, but there are still a few boxes in the house. I went through one this morning. It wasn’t easy.

I listed several on my Paperbackswap account. One has already been requested. I have great hopes for more to fly out the door by way of the Post Office. There were a few, however, that I couldn’t post.

Three didn’t have ISBN numbers. Yes, readers, I have books old enough that they don’t carry that magic number. Without it, I couldn’t post them on the swap site.

Then there was the domino effect. I attempted to stack the new entries in the bookshelf with the others, but there wasn’t enough room. My solution: sort through the contents of the shelf and make room. I managed to group several folders together so they didn’t take up quite as much space, and I also found ancient paperwork worthy of the shredder. I reorganized so that all garden-themed books (not going anywhere, thank you very much) have one section of the shelves and all textbook types are together in another.

At this point the table was covered with piles of books and my laptop, open to the “Post Books” tab on Paperback Swap. Craziness, eh? More so than you realize; we had a meeting scheduled in less than an hour and we’d need the table by then. I did manage to get the books back on a shelf, power down and stash the laptop, and wipe down the table before our meeting began.

And I haven’t even mentioned the books I didn’t post or set aside for an upcoming rummage sale: a Leo Lionni, a Tomie dePaola Strega Nona book, and a couple more that need to be stored with others of their kind in the attic.

Books. It’s not easy being green when it comes to literature. I might sort through the garden stack again – or maybe not. It’s a good season for selling those to Half Price Books; it’s also a good season to browse through a few of my favorites.

Books. It’s not easy being green when it comes to the written word. Heaven help me if I ever have to decide between books and shoes for shelf space.

It’s not an annotated bibliography, but a short plot summary for each should do.

Phoenix Rising, by Karen Hesse. Nuclear meltdown in a nearby power plant puts a whole community at risk of fallout contamination. Told from the perspective of a teen girl, this story will both touch and frighten readers. Masks, Geiger counters, and other protective gear become everyday items. When her family takes in a boy with radiation sickness, the girl starts to see the disaster with new eyes.

The Hunger Games by Suzanne Collins. If you’ve seen the movies, you’ll like the books even more. By telling the stories in first person, Collins helps readers understand Katniss’ point of view and how and why she becomes the reluctant role model for the revolution.

1984 and The Handmaid’s Tale would have to be on the high school or college list. The more recently published Cyberstorm could join those. If you’re really brave, try Cormac McCarthy’s The Road, and don’t forget Ray Bradbury’s Fahrenheit 451.

Are you with me so far? Required reading for facing a Trump presidency will show the frightening ways that life imitates art.

I asked some of my friends on social media for suggestions.

Animal Farm becomes more relevant as Russia leans more toward its Soviet Union past. We the Living by Ayn Rand; One Second After. by William R. Forstchen. Brave New World, of course. They listed A Clockwork Orange – shudder.

Why the book list, people might ask. Why? Well, folks, I suggest that reading a few of these, followed by some serious thought and observations, might open some eyes. More than that, analysis of many of these plots has the potential to open minds.

Friends, family, readers, can you suggest other titles?

I kept thinking of the George Carlin quote about reading and questioning, but it didn’t quite fit. I went with Jack Prelutsky instead.

Meanwhile, I shared this post with the online world.

I’m going to send you to another place on the web today. It features me under my own name sharing my own expertise. I apologize in advance for the overuse of adverbs. It happens.

Prior Knowledge leads to Better Comprehension 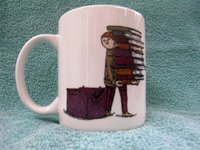 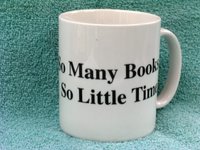 The quote says it all, doesn’t it? There aren’t enough hours in the day or days in the year to read everything I’d like to read.

I rescued this mug from a rummage sale. I still have it. Thanks, Howard! You and I shared this philosophy.

An encore post from several years ago – I still remember the child popping up and looking confused. I would have hugged him, but I’m sure he would have been utterly embarrassed. As we’re saying goodbye to my book-loving stepfather, this post reminds me that books are amazing.

It was a typical class transition, which in my class means a struggle to get everyone to shift gears mentally and physically. Then, guide all 25 of them into the hallway (quietly!) and across the hall for Science, and welcome the other group of 9- and 10-year-olds into my classroom for Social Studies. We made it through these maneuvers, I allowed one girl and one boy to use the rest rooms, and then turned out the lights and turned on the overhead projector to introduce the details of the upcoming research project.
Suddenly a confused-looking face peeked up from the Book Nook corner behind the computers. One of mine, looking confused, stood up and shook his head a little. He had been so involved in the book he was reading, so totally lost in its world, that he never noticed the rest of the class putting away their math books, getting out their science folders, and leaving the room. He smiled sheepishly, gathered his materials and left the room.
No, I didn’t give him grief. I couldn’t. You see, I recognized a little of the fourth grade me in this kid. My mother remembers the time I walked home from school reading a book and I walked right past our house. Books? They’re great. Who needs TV?

In case you’re wondering, the book was a Junior Classic, an abridged version of Robinson Crusoe that I picked up for $1 at a thrift store.
It was a dollar well spent.