Our offices are rather cramped. I may have mentioned the Coffee Closet, a.k.a. the Clounge. We have no room to sit down together, and there is no lounge or meeting area. The coffee maker and the microwaves are in a storage closet, on a table opposite shelves loaded with books, manuals, bags full of math manipulatives and science materials, and boxes of pencils and pens. And more, I’m sure, but there are boxes I’m afraid to open, they’ve been there so long.

Anyway, we have no place for families to sit down and wait, either. Teachers are creative, even when they work in cubicles, so of course someone came up with a solution. 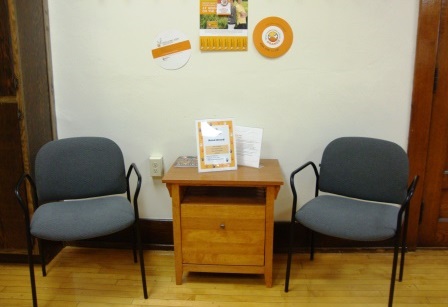 It’s just two chairs and a small table. To the right is our main door; to the left, storage lockers. This little spot is in a huge hallway — huge in the way that it’s a school hallway, wide enough for large groups of students to comfortably pass from one class to another. Nowadays, on our top floor at least, only teachers and administrators wander this hallway, and usually just to get from their own offices to the bathroom and back again.

But as it happens, I had another brainstorm. Parents often sit here while they are waiting for their children to take a placement test or get a benchmark reading assessment done. Many parents have youngsters along, and then have nothing to do while they wait. Here’s our chance. We’ll give them something to do, something valuable, something that will be good for both parent and child.

We’ll create a read-aloud station in our new Hallway-Lobby.

It’s fairly simple in concept. A set of books, a batch of informational brochures, and a sign explaining it all. 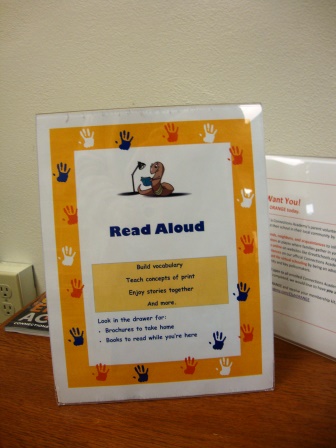 And below, the drawer, previously containing only empty file folders, now filled with learning materials. 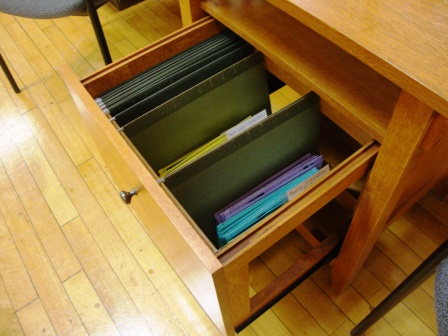 I copied them in color, just for fun.

Books are on the way. I ordered ten different picture books from Paperback Swap dot com, and six are already in the mail headed my way. I’ll beg and plead I mean I’ll write for a grant or two and see if we can beef up the collection, and then we’ll have it: the reading area.

I’ll let you know how it works. The boss likes it, so it must be worth something.

>Juggling. Juggling work, family, home. Juggling the needs of aging parents and needy kids. Juggling tennis balls that become eggs that become watermelons. Juggling several large fruits with one hand while holding a cup of coffee in the other…okay, back to the topic.
Is family life really about keeping all the balls in the air and keeping them moving, or is a more accurate metaphor that of a tightrope walker? Balancing on that thin wire, holding a number of props weighing us down…let’s see how this can look.
On my school/work shoulders, progress reports and an upcoming IEP. Added to that weight was a directive to move “my things” out of my old classroom. The boxes they thought were mine, however, were actually old curriculum materials. I threw several away, hoped they weren’t valuable, and labelled the rest for storage. Then, and only then, I returned to my desk and my gradebook.
On the other hand, or the other shoulder, Husband had the week off during Amigo’s final exams which helped with the odd schedule that always accompanies finals. I could stay after school for an extra hour because I didn’t have to rush home to take the kiddo to an appointment.

Rather than go on and on about the uneven balance of work and home and outside events outside my control, I’ll just call on a skill many mothers possess. I’ll climb on that tightrope, look straight ahead, find a focal point, and breathe. In, out, in, out. Then a deep cleansing breath, and I’m there, on the other platform, still holding all of my burdens, but at least able to hang onto something for support.
That’s what it’s all about; support. The safety net below our tightrope is real and necessary. I think my next task is making sure that net is in good repair.

This post was written for Parent Bloggers Network as part of a sweepstakes sponsored by BOCA. I can’t write about juggling without thinking about my grad school friend, Deb, who found herself competing for attention with a very real juggler.

>Then there was the year when everything seemed to go wrong around Christmas. I fought with the snowblower and lost, with the penalty being a soft tissue injury that hurt like heck and didn’t get better.

We brought daughter home from school after final exams to have her wisdom teeth out, planned it perfectly for my last day of school before break so that her younger brother wouldn’t need a sitter, and voila! we had an ice storm that closed schools. Grandma saw the school closing report on TV and called up to offer her assistance. We crept across town on icy-coated streets to take La Petite to her surgery. I didn’t relax until the car stopped moving in the parking lot.

Later that day, after getting La Petite’s pain meds and antibiotics and changing her dressing every hour on the hour, I went to my own doctor and had my still aching wrist X-rayed. No fracture, luckily, but she confirmed that soft tissue injuries hurt like heck and then offered a splint and anti-inflammatories. Back to the pharmacy I went, then over to Grandma’s to pick up Amigo and finally settle at home.

La Petite’s mouth healed slowly but surely. I wore the splint faithfully for my seven to ten days, taking it off only to shower and to stretch twice a day. On Spint Day Ten we got a phone call: my father had died in Missouri.

Husband couldn’t take off from work. One of his co-workers had broken a leg, and Husband was the only other one trained to run the equipment and drive the truck. He had just been sick, too, and was dragging himself to and from work and sleeping as much as he could at home. The kids and I piled our luggage, sore mouth, and splinted wrist into Husband’s Saturn and headed south.

We survived the trip, grieved, shared memories, and stopped at my brother’s house near Chicago on the way home. I apologized to daughter for “ruining” her New Year’s Eve, and she said she hadn’t even thought about it. Son did remarkably well, given his Asperger’s. He was thoughtful and well-behaved on the trip and at the ceremony. We were all exhausted.

Then I went back to school. In hindsight (always 20-20), I should have taken time off. I taught for three days (with my splint still on, wrist aching from driving 12 hours each way), and then said I had to rest. I took two days “death days” allowed by contract, and slept. And slept. And slept.

Life is much better now. Wrist has relapses now and then, but very seldom. I don’t touch the snowblower any more, but if I need to we have a new one with electric start. Amigo and La Petite remember the trip and the funeral, but they weren’t overwhelmed or traumatized by it. They survived, as did I. In fact, the multiple trouble of that holiday and the months that followed inspired me to start blogging as a therapeutic outlet. The rest, dear readers, is history.

>We are the sandwich generation. I mistyped that the first time, and it came up on the screen as “sand wish.” Maybe that was a Freudian slip; I wish this “new normal” would settle down some.

Husband’s father, my father in law, has been in steadily declining health. He is now on a pump for painkillers, uses a wheelchair when he can and a walker when he can’t, but needs essentially 24/7 assistance. That assistance, of course, falls to his wife, my mother in law.

Husband and his brother are working together to help their parents handle the move to a senior living place, a set-up where both can live and FIL can get more of the help he needs. We really want them living closer to us so we can help out in an emergency; they now live two hours away. They seem willing but they’re stalled, so Da Boys and their wives (me and sister in law) are diving in feet first to get the move, well, moving.

On the other side of the sandwich is school starting. Amigo needs to get ready for the start of his school year. His new backpack sits in its unopened package while the old one with the broken zipper sits in the hallway waiting to be shipped for repair. La Petite, on the other hand, needs to pack and move to her apartment before her semester starts. We anticipate this will take two trips: one with the majority of her belongings, and one final move with her rabbits.

Making the whole thing stickier (PBJs are always sticky) are our workloads. Our jobs, remember those? The occupations that bring in paychecks, pay the bills, keep us from becoming another statistic in this recession of ours. Yes, those jobs. Husband’s job gets crazier with the onset of football season, mine with school starting.

In conclusion, the timing is awful.

Add to that Amigo’s health and basic living chores such as laundry, cooking, cleaning, and maybe sleeping now and then….

We’re the sandwich generation, and sticky or not, we need to get used to this situation as our New Normal.

This post is my entry in MamaBlogga’s Group Writing Project for August. If you’d like to enter, the entry form is here. Her theme this month is “The New Normal.”
And don’t forget that Thursday is my regular post at MidCentury Modern Moms. This week is Back to School Week with posts about our not-so-little darlings and their often atypical needs.

>Husband’s parents should move into a more accessible apartment.
Reality: FIL can’t handle moving chores physically, MIL remains in denial and won’t take any action until he “recovers.”
End result: Husband and his brother will end up shouldering the emotional burden while brother’s wife and I help out with the practical end of things.

The ‘rents should take the initiative and sign the papers on the senior condo.
Reality: Their denial has kept them from acting.
End result: We’ll have to confront them directly.

The parental units, as the situation gets more and more dicey, should prepare power of attorney with at least one of their sons.
Reality: Denial.
End result: We plan to sit down with them and ask some hard questions and push for answers, including papers. They can revoke these powers after the move if they wish, but for now at least, it would make paperwork and downpayments much easier.

We can’t control their actions or attitudes.
We can control our own reactions.
We can work together, brothers and wives, to come up with a plan, but we can’t control the parental units’ reactions to it or their choices. Here’s where the wisdom to know the difference will come in handy.