Ah, Thanksgiving. In the absence of the fairies, we split the responsibilities and managed to put on a good spread ourselves. We learned a few things in the process, too.

Our kitchen needs more counter space. It’s a little like the commercial with the guy realizing he has enough food for his guests, but doesn’t have enough room in his refrigerator. I thought I was brilliant in the way I plugged in an outlet strip and connected the crock pots to it. There they were, spread out on the kitchen counter, heating the mashed potatoes, curried squash soup, two kinds of stuffing, and mulled apple cider. Then we took the turkey out of the oven and realized there was no room to carve it. Chuck ended up setting a large cutting board across two burners (turned off, of course) on the stove and carefully carving the bird there.

La Petite’s stuffing and mashed potato recipes were delicious. She even made small quantities of plain potatoes and stuffing for those family members known for their preferences toward the traditional versions.

A traditional holiday is often a good time to create new traditions. We served the holiday dinner on Friday for suppertime instead of on the calendar’s Thursday. It meant more relaxing travel for those on the road, more sleep time for the late-shift person in the family, and all in all simply worked better. We’ll be open to moving Thanksgiving off the Thursday in the future if needed.

On the same note, my birthday and my sister-in-law’s birthday land near Thanksgiving every year. Chuck’s birthday and La Petite’s are in mid-December, just a few days after our niece’s (she of the apple cider wine glass). We were universally not ready with gifts wrapped, but we exchanged presents anyway. After we were all done, the laughter had died, but the smiles remained, we decided that maybe this No Wrapping was a good idea.

There’s a lot for which to be thankful this time around.  Chuck no longer has to fear getting sent off with the satellite truck. When our Packers played on Thanksgiving, that was a very real possibility. Chuck left the television industry about a year ago, and it was a good move. We were all (relatively) healthy. Everyone traveled safely. Most of all, we enjoyed spending time together.

And that, my friends, is the best tradition of all.

>The apartment has plenty of character all by itself, with its multi-color bathroom and wild style light fixtures. But of course, the college kiddos have added their own touch. We were greeted by a poster for the school newspaper – featuring a rabbit, of course. 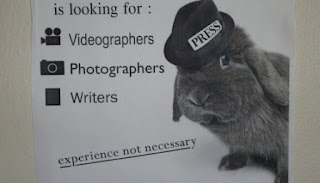 While La Petite took her camera to the football field and covered the game, Amigo relaxed in front of her TV and cheered on the team from the warm and cozy Love Sac in her living room. They won, by the way, setting themselves up for a playoff game in Virginia – another story altogether. 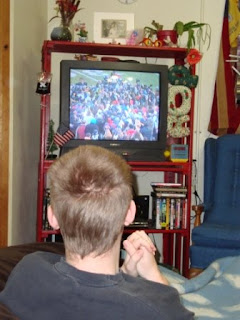 Me, however, the mama. I took over the kitchen table with my school work, spread out science workpackets to score and record, devoted teacher that I am. Chuck took inventory of the refrigerator and went grocery shopping. 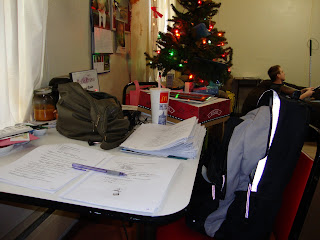 But after the game, after the shopping, we sat down together and celebrated birthdays: Chuck’s and La Petite’s. It was a fairly relaxing experience, all in all, a short but valuable respite from our busy lives.
How busy were we? This visit took place in mid December, and I just downloaded the pictures now. In the NaBloPoMo category of Best, this day was one of the Best Relaxation moments of December.

>It was a pantry raid that could have made even the host of Suddenly Frugal proud. Weather had something to do with it, too. It was bitter cold; the kind of day when the thermometer appears broken because it can’t handle double digit degrees below zero. Schools were closed, and we were housebound for the second day in a row.

Amigo thought this was great because it was his birthday and he got a bonus opportunity to sleep in due to the unexpected day off from school. I really, really didn’t want to go out of the house, though, with the weather so cold even icicles weren’t forming. Unfortunately, the vaporizer wasn’t working and we needed a birthday cake, so an errand run was in the works. Our favorite bakery is half a block from Walgreen’s, so it would have been a quick one if I had to go.

Instead, I utilized the fourth R: repair. I cleaned the vaporizer, added a pinch of baking soda, and it worked again. Yippee! One errand eliminated.

Next, I dug through the pantry and found a yellow cake mix. Yes! I could bake his birthday cake without ever leaving the house. Wait a minute…frosting…I had a full can of white frosting and a chocolate package only about a third full. Yellow cake really works better with chocolate, not white, so (you guessed it) I mixed a little white with the chocolate to make a light chocolate frosting to top the yellow cake. I made a small amount of powdered sugar frosting with a few dark chocolate kisses melted in it, and asked La Petite to drizzle it artistically on top. We add a few candles and basic cake decorations (from the cupboard), and Amigo’s birthday cake looked good enough to serve to the Grandmas and Grandpas.

We still left the house to take the family out for a birthday dinner combined with a bye-bye back to school dinner for La Petite. Somehow, leaving by choice wasn’t quite as freezing as the errands might have been.

Seventeen: wow. Where did the years go?

Me: Dear, I found this really easy recipe for Beer Bread. In fact, it’s called Beyond Easy Beer Bread. And if I bake it, well, may I use a bottle of your beer from the fridge or should I run out to Flanagan’s and pick up something less worthy?
Him: Uh — well —
Me: Don’t worry, I’ll understand if you’d rather I left the good stuff for actual drinking.
Him: Is any special kind recommended? Like, do light or dark beers work better?
Me: This recipe doesn’t really specify. Although it’s possible that a cheapy like Badd Light probably wouldn’t work as well.
Him: I meant… well, um, okay. (Nods)
Me: Are you sure?
Him: Yes. You can take a bottle (gulp) of my beer to bake beer bread.

Well, I did promise I wouldn’t take any of his favorite specialties like New Glarus Spotted Cow or Fat Squirrel. And maybe, just maybe, I’ll have to visit a couple of local brew-pubs to get some goodies for his birthday or Christmas. Because, you know, he’s making such a sacrifice for the good of his wife’s baking. And the family’s holiday eating. And all that.

And if everyone really likes it, and I need to make a double batch next time….

>The best bedtime snack ever: a piece of birthday cake and a glass of wine.
Mmmmm. Thanks, dear.
Goodnight.

>Keeping track of numbers must not be too important in my life — I missed the chance to “celebrate” my sesquicentennial post on Compost Happens. Maybe it hasn’t been 150 years — but today’s post is number 153, so any real anniversary discussion would have taken place three posts ago. I must have been too busy preparing Thanksgiving dinner, cleaning up after it, contemplating (but not actively participating in) Black Friday, ringing a bell for the Salvation Army, and the daily chores of life. Come to think of it, all of those things were more interesting to do (and to blog about) than the simple number of 150, anyway.
With Thanksgiving over with, I can start to work on (drumroll, please) Birthdays! Hahaha, you thought I was going to say Christmas, didn’t you?! In our home, the Christmas season is also the birthday season. Mine is in November (ahem, today), Husband’s is in mid-December, La Petite’s is the day after that, and then we can put up the tree. After the New Year’s ball drops and the Christmas tree comes down, we have about two weeks until Amigo’s birthday. That’s just the immediate family; there are other birthdays in and around this time in our extended family as well. I wrote up my “Holiday Gift Inventory Notebook” today to make sure I don’t overshop or inadvertantly miss someone.
I am taking some advice from an article in today’s paper and wrapping presents as I buy them. I have almost everything I need for my Secret Santa project at work, so I will wrap these and hide them in my classroom’s locked closet, in the space that was filled with test booklets a week ago.
Now that I have reclaimed the kitchen at home (stored leftovers, threw away what was left of the turkey carcass, prepared soup stock for freezer), I can focus on real life again. Real life, coffee mugs, lesson plans, and the works. We have a saying in my workplace when things get frantic: “Never a dull moment.” Life, such as it is, isn’t dull. Not at all. Not even at Post #153.