Now that I’ve finished A Summer Affair by Elin Hilderbrand, I’m not as concerned about the second question. It’s a good book, easy to review. And the first? Well, I really can’t control the number of readers, can I? 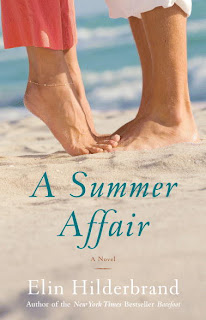 A friend and co-worker used to say, “Guilt is a wasted emotion.” Claire Danner Crispin is a woman who feels guilt deeply, even when she isn’t at fault. Claire is an artist, a mother, a wife, and an all-around good friend. She isn’t an A-list local celeb in her home of Nantucket, so when the head of an important charity asks her to co-chair a major event, she swallows her surprise and says yes. The inevitable guilt presents itself immediately, though, in the form of explaining to her husband that she is taking on this near full-time responsibility and going back to her artwork as well. She understands that her connections to a major rock star (her high school sweetheart) and her career as a blown-glass sculptor are the main reasons she’s been asked to chair the event, but she still takes it on. If she’d known – but how can anyone ever know in advance? – how her involvement with the charity and its leader would complicate her life… but no spoilers, really.

Guilt. Claire feels guilt for actions she’s taken and for actions she hasn’t. She feels a heavy burden for a friend’s car accident: after all, it was Claire who invited her out drinking, bought her the final drink, and did not insist on a cab. Even though the accident and subsequent injuries were not Claire’s fault, she feels responsible and guilty. Claire’s youngest child was born prematurely, and she feels guilt because she may have caused the pre-term labor in an accident in the “hot shop” where she creates her glass pieces. As the charity gala event planning goes on and she spends more time away from her husband and children, Claire feels guilt for spreading herself too thin and neglecting her family. She feels guilt that the PR for the event features her to the expense of others involved. She feels guilty when her best friend doesn’t get the catering contract. And that’s not even touching on the guilt she feels for the title affair…

Elin Hilderbrand uses several techniques to keep her readers thinking and wondering. Chapter titles are simple: “He haunts her,” “She surprises herself,” “He leaves her.” However, the chapters don’t always follow the obvious meaning, so don’t assume anything. Most of the book is from Claire’s point of view, but later on changes to a more omniscient third person narrative. This is awkward at first, but as the story unfolds and the other characters’ emotional investments become clearer, this change in perspective works. Claire remains the central character, even as we see and hear others react to her. A Summer Affair is her story.

I recommend A Summer Affair as a good read, and not just for summer. The plot is complex enough to keep the reader’s interest, but not so intricate that it loses itself in the details. I’ll leave it up to you, the readers, to decide whether the ending is realistic or simplistic in its resolution.

I received an advance copy of the book from MotherTalk in order to write the review. I mentioned above that mine is at the end of a long line of reviews: you can read the others at Mothertalk. Other reviewers often have different opinions!