>Is my little patch behind the garage really a 21st century Victory Garden?

I’ll clean the tomatoes and peppers myself. Sam & Ella? Who’re they? But…I plant tomatoes and peppers every year. It’s not a reaction to the news item, the danger in buying a tomato that had been harvested or stored in a warehouse with other “sick” tomatoes.
We enlarged the garden this year. It really does have an impact on our eating. When the lettuce is growing, the crop has an impact on our bunny-food bill as well. But — I planted all kinds of green leafy goodies and then I didn’t label the patches. Which one is spinach, Popeye?
We eat from the garden in season. From BLTs to zucchini bread, we eat well in late summer and early fall. A little rhubarb, a few green beans, and sometimes grated zucchini will go in the freezer for winter. But — after the main harvest, we’re (mostly) at the mercy of the grocery stores.
My little patch of dirt behind the garage isn’t really an economic statement or a reaction to any other action. It’s simply what it is: a backyard garden. 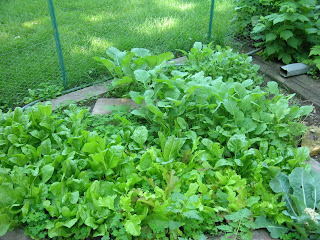 So really, where’s the spinach?

2 thoughts on “>victory in vegetables”