>It’s not the State of the Union. It’s not even the State of the State. It’s just the state of my bedroom mid-project. Awaiting installation are two brand new energy efficient major appliances: new LG washer and dryer. They’re waiting — in my bedroom. The shiny cover on the bed is the tarp: clear plastic, it keeps the dust off my sheets. See the chair behind the bed? It’s sitting on a cedar chest, keeping the box fan company. Don’t ask. 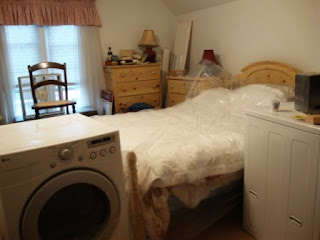 Last night a tiny bunny named Krumpet who lives in Amigo’s (dusty but otherwise unscathed) bedroom found her way out the door while the carpenters moved the famous toilet into its permanent home. The tiny and adventurous bunny was nowhere to be found. Trust me; we searched and searched and searched. Finally, I shook the treat jar. We heard a thump in a corner. She came out – and then hid just out of reach under the bed. 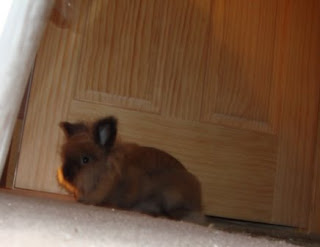 Finally, we got her near the door, only to lose her again to the safe place under the bed where neither Chuck nor I could reach her little furry tail. If bunnies could laugh, she would have been pointing and gloating “Ha, ha! You can’t get me!” 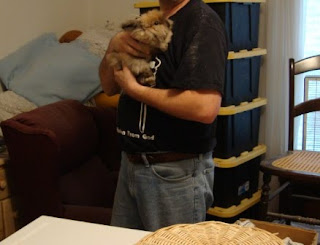 We managed to force her to one side and Chuck grabbed her. He held her close, settled her down, and with a sigh of relief we moved her back into Amigo’s room, sans toilet. Oh, the drama!
Why didn’t we just let her roam? Well, there was danger for a small furry adventurous creature. If she had gone into the open ductwork, she could have fallen and been hurt or even killed. There were electric cords out, too – big ones. If she’d chewed on one of those, the damage would have been major – to her and potentially to the house. We kept her in Amigo’s room for her safety.
I’ll be happy when this project is done – for so many reasons.

3 thoughts on “>Remodeling the old Homestead: the runaway bunny”