>October. Leaves are changing color, the air is crisp and cool but pleasant, and school is in full swing. Weekends mean football, leaf raking, and politics.

We made our usual trip to the downtown Farmers’ Market today. It’s nearing the end of the market season, so there were fewer vendors and fewer customers, but we still managed to find deals on local produce and products. I settled Amigo near the musical entertainment and then proceeded onward to my favorite booths. One of my favorite farmers wasn’t there any more. We’ve bought sweet corn and squash from him; maybe he’s done selling for the year. My favorite baker was there, so I bought two loaves of her bread. We picked up honey crisp apples and a bag of fresh pairs, er, pears. Husband bought a bag of very fresh cheese curds (squeak, squeak). We picked up two pumpkins and moved on to pick up Amigo.

That’s when I was distracted by a man holding campaign signs. Obama signs have been hard to get in our town. As soon as the Democrats’ office gets a shipment, they sell out. When I saw this man holding three — 3!! — Obama signs under his arm, I asked about them. He directed me to the Dems office two blocks away because they had just gotten a batch in. Husband took Amigo and the goodies back to the minivan while I hoofed it down the road to pick up my coveted signs.

The office was hopping with activity. Penny (the local candidate for state assembly) was there working with volunteers. She thanked me for the letter I’d written to the newspaper in her support and then directed me to the desk for buying signs. The harried volunteer there didn’t have change for my twenty (I’d used my smaller bills at the market), but another staffer helped her find some. The still didn’t have exact change, so I bought two signs and two buttons, knowing I could find another home for the second sign.

Sure enough, the sign ended up at the house across the street before I even had mine set in the lawn. My neighbors were on their way home from a walk and were thrilled to take it. Husband prefers a clean lawn, regardless of his voting preference. But he’s willing to indulge my political activism for a few weeks leading up to November 4th.

A matter of minutes after I’d posted my new gem, er, sign, the phone rang. It was a volunteer from Planned Parenthood making calls to support their favored candidates. I don’t remember campaigns getting this aggressive four and eight years ago. I’m getting recorded message calls from the Republicans, daily (daily!) mailings from both parties, phone bank calls from all of the Democratic candidates’ staff and/or volunteers, and personal contacts with several of the candidates themselves. 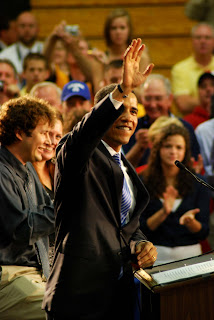 3 thoughts on “>’Tis the season to think globally, act locally, and vote!”