Remember the Lions of the Valley project? More than a few years have passed since The Lion King made its appearance in our fair city. Here is one example of creativity and caring. Another friend and coworker teamed up with another artist friend to decorate this fiberglass lion. The lion’s title is lengthy, but straight to the point: Breast Cancer Survivors: Not an Endangered Species.” 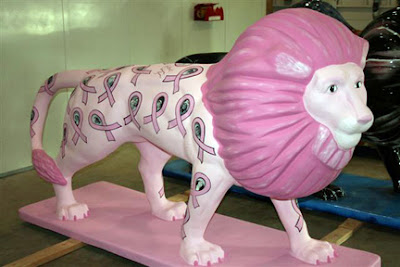 It’s now several years later, and the lion is still pink, I think. It’s been moved from its former sponsor to a hospital’s entrance, and the pictures have been painted over. I’m a little sad about that. It was the humanity of the design that made it work for me. But in any case, the lion still lives, and so do many multitudes of those who had breast cancer. Had. Past tense.

Did I mention that I know four of the women pictured on the lion? Eat your heart out, Jeff Probst — these women are the real survivors.