Two seasons ago, we built a second garden plot. Built, that is, as in started from the ground up. With a barrier layer of corrugated cardboard and newspaper covered by a layer of compost and autumn’s fallen leaves, we left that patch of lawn to die during the winter. Spring came, and we covered it with a layer of topsoil trucked in from a local nursery.

It wasn’t the best decision. The large load of soil was handy and inexpensive, but the quality left a lot to be desired. The soil was full of weed seeds, so I spent much of the summer pulling weeds I’d never seen outside of the edges of farm fields. The soil was just like my yard’s native soil: hard, thanks to heavy content of red clay. Living near a river has its charms, but the soil quality isn’t one of them. I’d paid for more of the same. How hard was it, you ask? Look what that soil did to my trowel. 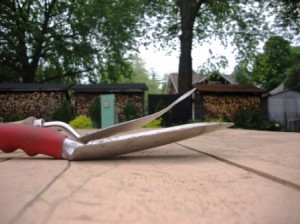 Throw in the Trowel

The second year the weeds were better – I mean, there were fewer weeds. I planted each tomato and pepper plant with a handful of shredded paper and a shovel of potting soil to improve the drainage factor. It was okay, but not great. When major rainfall creates Lake Okaybyme in the backyard, the gardens, both of them, drain better than the lawn. It still wasn’t the greatest quality soil, though. The shallots were an utter failure. The soil was just too thick to let any root crops grow. Talk about onions making people cry….What next?

This is the year of Too Many Tomatoes and Peppers. I planted the pepper plants with the usual layer of shred and a batch of topsoil.from a local hardware store. So far, they’re doing well. The tomatoes, however, presented a challenge. Okay, a number of challenges.

1. I ran out of topsoil and potting soil, both. It took three stores before I found what I wanted because one was closed, one was out of what I wanted, and the third, finally, had plenty of the plain stuff.

2. I have too many tomato plants. Even with careful planning, they will not all fit in the garden.

3. The soil, even after turning with a layer of homemade compost, is still full of big chunks of red clay.

1. Ace Hardware is my friend. their topsoil contains sand and peat – no phosphates. Their potting soil is a little fancier (see below), but it suits my needs just fine.

2. A few stray tomato plants will go behind the pepper plants in the big garden. If I still have leftovers, they’ll live… well, they’ll live. I’ll find a place.

3. I prepped the tomato garden soil in a big way. Instead of prepping each spot, I dug trenches and prepped the trenches with shred followed by a wheelbarrow full of Ace’s soil. The top layer was still native, complete with heavy clay, but it was much, much better for planting. 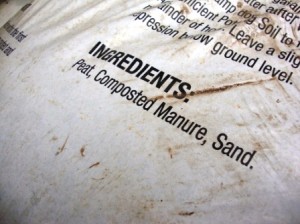 3 thoughts on “Soil vs dirt dilemma”