Chuck is helping with the rock garden. Sort of. A little. Well, he’s helping a bit, and he’s doing so only a little grudgingly. He makes fun of it, too. Growl.

I pulled all the big rocks to the sides of the garden space and then shoveled up most of the small rocks. The smaller rocks came with a lot of soil. I kept thinking I needed a shovel equivalent to a slotted spoon. The rake was too big, and the shovel brought up so much dirt…. well, anyway, I ended up with a wheelbarrow full of stones and soil.
Meanwhile, I put down the new barriers to (hopefully) keep the mint in its place. I hear you laughing, readers. I think the layer of 20 Mule Team Borax under the barriers will help quite a bit. Oh, and Petunia? The pizza box from the leftovers went to good use as part of the rock garden barrier, so thank you.
Then I attacked the stones. I pulled up a chair next to the wheelbarrow and started pulling stone out of the dirt and dropping them in a bucket. The trouble was, it took a long time and felt like I was only getting, well, a drop in bucket. I started to ask Chuck’s opinion. He interrupted with, “bigger rocks” before he’d even heard the full question.
So much for advice from the engineer in the house.
I moved back to the wheelbarrow and got another bucket full of stones. Chuck, full of remorse (not really), came outside and suggested I buy a few bags of decorative stones instead of plugging away at the chore of picking them out and rinsing them off at the rain barrel. I hesitated. It’s a point of pride that I created this rock garden last year at no cost – seriously, not a penny. But when reminded that my time investment is worth money, too, I gave in. Chuck dumped the wheelbarrow’s load on our soon-to-be berm in the backyard and we bought three bags of rocks from Home Depot.
The rock bags had some ridiculous marketing on them. Who designs these things? “Will not decay.” Sure, but will it erode? “Easy to apply.” Um, yeah. Open bag; dump. 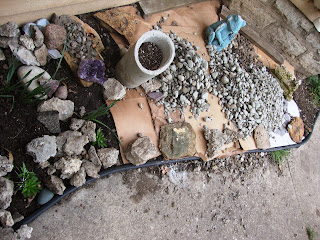