It’s been a random day – or several days full of randomness.

Chuck started cutting the lawn Monday evening, and he came too close to a hornets’ nest. They stung him and chased him around the house. He had trouble knocking enough off that he could come in the house! Several stings on the left hand, a few on the right, and he was in pain and more than a little freaked out.

The exterminator came Wednesday. He found the nest, sprayed it, and informed Amigo that the bees would be “angry today, but dead by tomorrow morning.” Result: Chuck didn’t attempt to mow again until Thursday.

Thursday he stepped outside to start the mower and the rain started.

The lawn looks like a wheat field. Or alfalfa, maybe. I’m thinking we should expand the garden and just quite mowing altogether.

Something about the first week of school makes me crave smoothies. Maybe it’s the transition from summer break to being a schoolie again. It could be the heat and mugginess. There’s also the possibility that I just like the smoothies from City Center Plaza, and City Center Plaza is only a few blocks from my workplace. On the way to the smoothie place, I saw this. 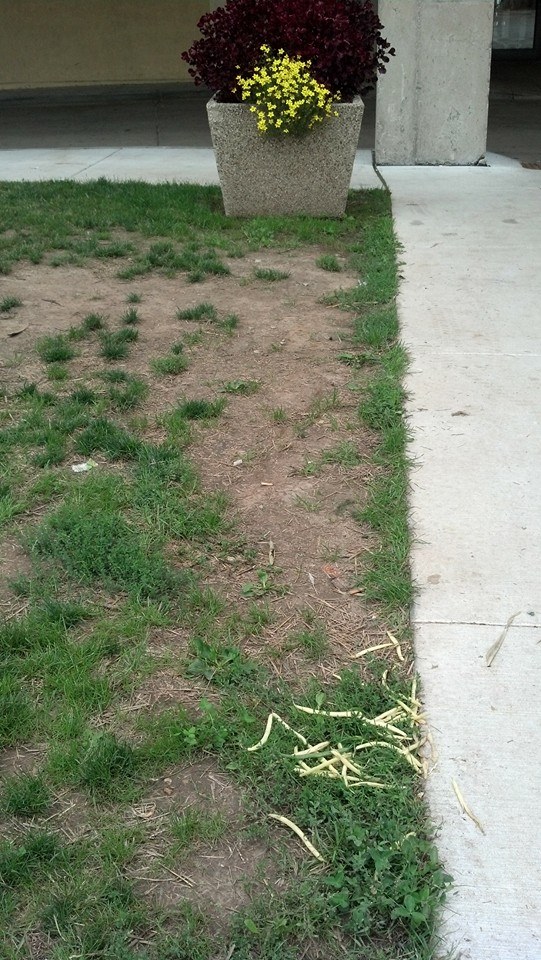 Someone spilled the beans.

I helped set up our book fair for the upcoming first day of “school” on Tuesday. We asked the driver of the truck if he ever sees kids waving at him. Why? He has Clifford the Big Red Dog and a few other classic characters painted on his truck, bigger than life. We teachers decided that Scholastic should paint Clifford on our vehicles and pay us to drive them around town.

So then Amigo and I went to a local pub that has a great Friday fish menu. I tucked a napkin into my shirt to prevent clam chowder spills and I had a frightening realization.

I was wearing a Milwaukee Brewers shirt in a Chicago Cubs bar.

I left the napkin covering the logo on my chest until we left.

So, readers, all in all, life is good. School starts Tuesday, and I’m looking forward to meeting my students and their families. Good times are ahead! Meanwhile, I’ll relax and have a weekend.

2 thoughts on “Hornets, beans, and Clifford the Big Red Dog”