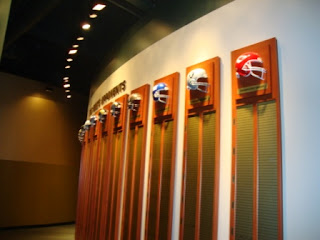 The Packers played the San Diego Chargers. Normally we’d look up a signature food from San Diego and cook it Saturday night. This weekend was different because the time available for research and grocery shopping was slim to nonexistent and because we visited Amigo on Saturday to watch a Goal Ball tournament. A what tournament? Stay tuned; I’ll have a post on it later.
What to do? The tiny bit of research I did named seafood and Mexican food as typical San Diego fare. That’s rather general, but it got me started. Most of the seafood in my freezer is Midwestern in origin – tilapia, etc. I did have half a package of shrimp, so I made it with thin spaghetti topped with butter and grated Parmesan cheese. Yes, I know, it’s a lame attempt at seafood. Saturday we ate lunch at Taco Bell, but that’s far from authentic, so it doesn’t count either.
Chuck got a little silly on Sunday. Since we hadn’t cooked a good San Diego food, he created the following. Readers, I give you: Sandy Eggs on Charred Jer-sey (beef). Trust me; it was an improvement over the Sandy Eggo waffles he thought of first. 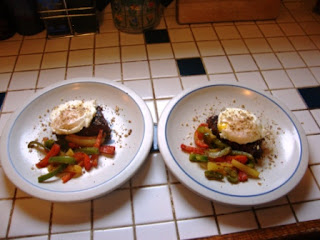 Translation: grilled steak with an egg over easy, topped with finely crushed pecans to resemble sand.
It’s a groaner, I know. Next week the Pack will battle the Minnesota Vikings. I have a dish in mind already, and it has no puns whatsoever.