>Daniel has no last name. He has no family, either; he creates his own family and friends with his highly developed magical imagination. He has amazing powers, outrageous intelligence, and a mission to avenge his parents’ violent deaths.

It’s too bad all of this doesn’t lead to a better story.

Daniel X is disappointing. James Patterson is a well-known author for adults, a creator of best-selling novels, a regular on Top Ten Lists. What happened here? The dramatic opening sets up the motivation and Daniel’s uniqueness, but after that – well, not much. The pacing lacks flow, connections are choppy, the villian was predictable, and frankly, I found it dull.

That’s ironic because Patterson’s marketing (and oh, he is all about marketing) is based on boys supposedly having very little interest in reading because they find books boring and “can’t get into the stories.”

Patterson needs to meet some of the boys I’ve met while teaching fourth through sixth grade. He needs to meet the boy who checked out Eragon from the library – for me! “Mrs. Teacher, you need to read this now because the sequel is coming out soon and it’s awesome.” How about the boy who kept hiding books in his lap so he could keep reading through math class? No, his subterfuge didn’t work. He still had to learn long division, but I let him read as soon as his homework was done. Then there was the boy who was so wrapped up in Robinson Crusoe that he forgot to go to science class. Tell me he wasn’t into the story, and I’ll pop a quiz on you so fast your head will spin. Would you like to hear about the boys who eagerly read the later books in Laura Ingalls Wilder’s collection? They wanted to find out more about Almanzo from Farmer Boy and learn whether his older brother Royal moved west with him.

Patterson suggests something teachers and librarians already know: give them books they’ll love.

The Dangerous Days of Daniel X may attract a few readers who like slimey aliens and big guns and a weak, unstructured story. I don’t plan to recommend it. 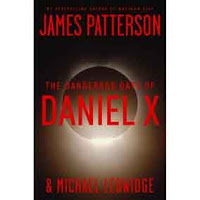 I received a free copy of this book in order to review it for MotherTalk. I plan to donate it to the middle school library. Despite my dislike for the story, I do not believe in censorship. Some kids will like it; it’ll be on the shelf for them.