Gather ’round, my precious grandchildren. There’s more to the story.

Children, the recall election of 2012 was like David trying to recall Goliath. Democrat Tom Barrett was David, along with hundreds, no, thousands of ordinary folk like me. Governor Walker was Goliath. Well, his machine was Goliath. He had the backing of millionaires and other wealthy folk from all over the country. His millions helped him buy billboards and ads galore. We couldn’t get away from his face. We never saw his back or his sides because it would show his bald spot. The man was egotistical as all get out. Meanwhile, on Team David (Team Barrett, that is), the campaign was far more of a grass-roots effort. People knocked on doors, made phone calls, dropped off literature, delivered campaign signs, and more.

One of the more creative groups in this grass roots campaign was the Overpass Light Brigade. This group gathered at various overpasses to hold up lighted signs that reminded constituents Walker was subject of a John Doe inquiry, announced that the recall movement was alive and well by holding up a standard Recall Walker display, and proclaimed support for Tom Barrett in the election for governor.

Home base for the Overpass Light Brigade (OLB) was Milwaukee, but chapters spread to Madison and other, smaller travel sites throughout the state. One weekend I joined in. I saw a memo on Facebook (one of the original social networking sites; ask your parents about it) that announced a need for volunteers to be Holders of the Lights. That was a fancy name for those volunteers who were willing to hold a sign in place while traffic drove underneath the walkway or street going over the highway. We were on a street in the small but busy city of Appleburg, overlooking highway 441.

The Light Brigade’s signs were simple and low tech. White Christmas lights fit into holes in black boards to spell out words like “John Doe” and “Reclaim Wisconsin” and more. My job that night was to hold up the “FOR” in “Barrett For Governor.”  We stood on the overpass as the sun set, watching the fireflies and cheering every time someone honked at our signs. 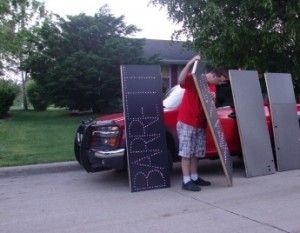 Some might wonder why we bothered. Well, it was all part of the grass roots, down to earth, person to person campaign. The Barrett organization held a fistful of dollars to combat Walker’s war chest of millions. Instead of fighting a losing battle on the opponent’s turf, the Democrats staged a guerrilla war. They called people, talked to people, helped people register to vote. They (well, that night, we) held up signs over busy highways. 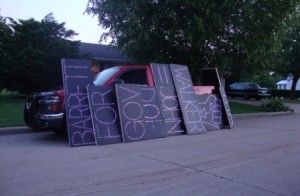 Children, I don’t have a photo of my own night on the overpass because I was too busy holding “for,” but I borrowed another. The Overpass Light Brigade was a bit famous in its day. I was proud to be part of it for a little while. 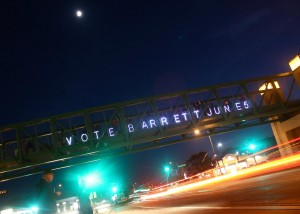 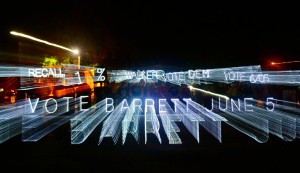 A little fun with the cameras