>I followed Chuck as he moved a vehicle from one office to another, putting in the right location so he’d have a ride back to his car after covering the latest, greatest sporting event in our are. Good thing he had his tools with him. What’s that? It’s a snow brush. In Wisconsin, we keep those in our cars year round. 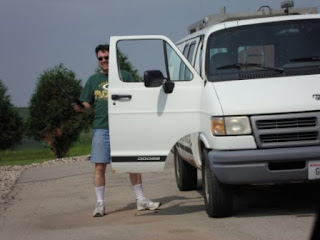 On this warm, sunny day in August, he used it to knock a wasp nest out of the utility van before he drove it. Snow brushes are handy for that kind of task.
I followed him to the next town over in case his engine failed. It worked. Maybe the wasps were the problem? Never mind. He parked it in the lot between a dumpster and an unused satellite dish, under a powerful outdoor light. Can you see the light? Nope, neither could he. Good thing he had another tool handy in the trunk of the car. 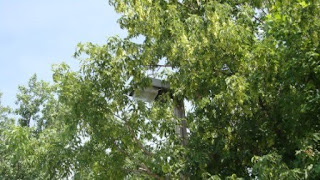 Good thing this big chopper was in the trunk. Good thing the van, an old live truck, still had a platform on top and a ladder to climb. Chuck lopped off as many branches as he could, then hopped down again. 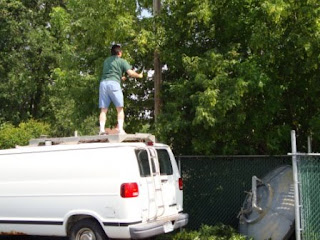 Then we went home. Now I know why he keeps so many tools in the trunk – logical or not.