>It was a classic pantry raid. It started as Truck Tomatoes: tomatoes, diced and cored and peeled, sauteed in olive oil with a little garlic and thyme. Then in true Daisy form, I looked into the refrigerator and started adding random goodies. A little oregano. Peppers, green onions. A small handful of spinach, a little grated zucchini. Two cobs of (already cooked) sweet corn – I could have and probably should have left it at one. Simmered to pieces while I boiled up a little pasta, it was an aromatic sauce that promised to be delicious.

Daughter looked at it with suspicion. “What’s in it? The corn is a little overkill, isn’t it?”
Chuck looked at the stove and the wall and asked, “Who cooked here? A chimpanzee?”

Okay, I admit it. I used a wee bit too much corn. I should have used the bigger pan. If I’d stopped at the basic recipe, the small skillet would have been okay. 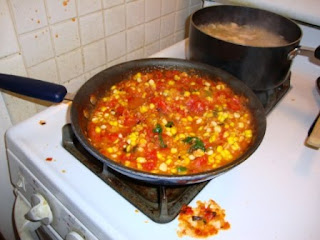 Despite their skepticism, they liked it. And yes, if you’re wondering, I did clean the stove myself.

1 thought on “>Too many tomatoes? Never.”