I saw it in the headlines again: The Year of the Woman. I thought, “Again?” Or should I say “Still?” Let’s see. To define a term, it’s often helpful to find out what it’s not.

It’s not the year of the soccer mom or the hockey mom. The WalMart mom is likely to be part of the 47%, so it’s not her year, either. It’s not the year of any mom, that is, unless it’s the mom who is worried about getting or keeping health care coverage for her children.

Is it the year of the young woman, the woman in her childbearing years? She may need health care, and if she’s struggling to find full time work, she might not have coverage. If she’s not using birth control or if it fails, she may need prenatal care. In some cases, she may need to terminate the pregnancy.  What if she miscarries? She’ll need medical care, counseling or therapy, and reassurance that she can try to carry to term again – or not, if she wishes.

Is it the year of the senior woman? The one looking at Medicare and wondering how the new plan will affect her access to doctors, prescriptions, home health care? This woman needs to understand her options and vote accordingly.

And that’s where the so-called “year of the woman” comes in. Pundits are asking, “How will the women vote?” Oddly, they’re considering the women vote to be one block of voters voting en masse Democratic or Republican. That’s not the way women think.

If it’s really the year of the woman, let’s respect each and every woman. Let’s make sure that she knows she can get pregnancy tests, pap smears, prenatal care, and other reproductive health care if she needs it, whenever she needs it, without question. Let’s make sure she’s the last word in whether or not she needs an invasive vaginal ultrasound — not someone in a suit speechifying bad science under a marble dome.

Let’s make sure the woman that votes today knows that rape is rape and rape is violence against women. Let’s make sure that people who would blame the victims of such violence are not the people making laws that decide on medical procedures for those very victims.

I don’t want today’s mother or grandmother to worry about the safety of her children or grandchildren because of backwards attitudes in official places. I don’t want a victim of violence to have to sacrifice a year of her life carrying a child to term unwillingly. I don’t want an older, wiser woman to have to limit her visits to the doctor because she runs out of vouchers.

If yet another Year of the Woman is really happening, let’s make it a year to remember. Let’s make it clear that we won’t be the little woman of some mythical olden day; we are adults with the same rights and responsibilities as the other gender. Let’s make it the year that we women recognize ourselves as strong, intelligent, and independent voters. 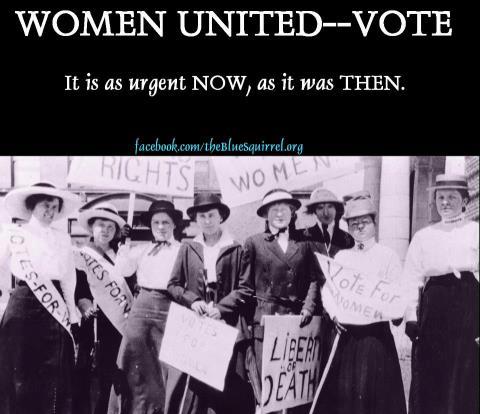