What’s the opposite of a boycott? In the 1970s and 1980s, Ms. magazine might have called it a Girl-cott or a Woman-cott. The premise is simple; instead of boycotting, or refusing to buy from certain companies, make a commitment to spend money where it counts. Support the companies that support the causes that you support.
Confused? Here’s an example.
Since our state legislature became fiercely divided along partisan lines, voices are emerging on the side of public workers. These voices are not necessary anti-Gov. Walker, but they sing the praises of those who earn their living by working in the public sector.
Penzey’s Spices, a Milwaukee-based company, has been outspoken in their support of teachers. Bill Penzey said, “To be pro-business is to be pro-education.” He understands that an educated workforce doesn’t cost, it pays. With that in mind, he set out to recognize teachers in the state.
He began by dedicating a spice to the kindness and dedication that teachers show – a spice named for the Wisconsin State Motto, Forward. Then he created a gift box including a bottle of the new spice, a small bottle of cinnamon, a book of teacher-supplied recipes, a teacher pin and a bumper sticker stating, “Teachers Care.” He gave a box to each and every teacher in the Milwaukee Public Schools.
This is more than a token appreciation gift. By donating a valuable product to a large number of public employees, he reminds the citizens and voters and yes, business owners, that public employees are not public enemies, but dedicated public servants.
Now – the opposite of a boycott. Whether this strategy has a name or not, the process is simple. Buy from companies like Penzey’s Spices. Whenever you get a chance, let them know why you chose to buy from their company as opposed to others. Speak with your dollars and with your words.
ow if you’ll excuse me, I need move forward and experiment with my new spice – right after I set out my red Teacher pin to wear to work tomorrow. 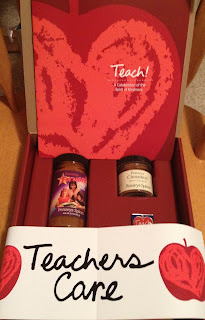