>Husband cut down an ornamental tree that had grown a bit too tall for itself. It was lovely when it was small, and I’m sure the previous owners of the home enjoyed it. But as it grew, it blocked the sun from my garden and its thorns (spikes! ouch!) imperiled anyone walking under the drooping branches. We made the decision, and down it came. 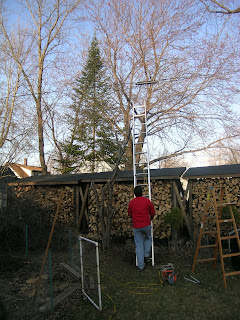 But high up above the ladder, the tree branches were tangled in and around the phone wires. He called the AT&T equivalent of Diggers’ Hotline to let them know about the problem and find out what they wanted to do. When he finally reached a real person (after several minutes of the voice-system maze), he was told to cut the tree down completely. When he was done and the branches were just dangling, they would send a crew out to get the tree out of the wires. 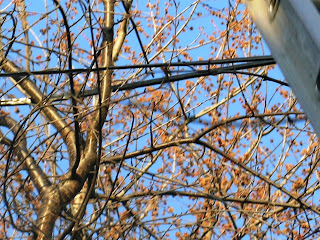 He cut the tree down. When freed of their lower supportive brethren, the tiptop branches wobbled, twisted, and fell free themselves. They left the phone service lines dangling, however. That was just the beginning. 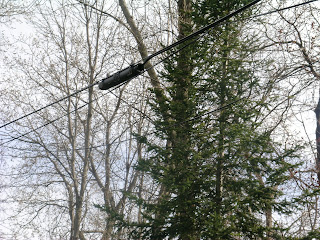 Husband called again to leave an update. We got a phone call later that week from a service technician who wanted to come while we weren’t home. Should have been fine; he didn’t need to get in the house. But no, it wasn’t that simple. Somewhere in the chain of command, the story became garbled. The tech thought we had trouble with U-Verse, our television service. He tested the line going into the home, found no problem, left us a note with his phone number so we could call him back because he couldn’t get into the home, of course.

So….husband called again. He explained that it wasn’t a U-Verse problem, a cell phone problem, or a landline problem. All of our services were working well. It was the line outside that might become a problem. He even described it in engineering terms so the technicians could understand. I offered to send them the above pictures if they needed more information….

The next morning, a weekend with all of us at home this time, the technician called. “I understand you want a wire buried?” Husband got off the phone and nearly collapsed with laughter. For a communications giant, the local folks certainly couldn’t get a message straight! The tech showed up twenty minutes later, Hubs showed him the dangling wires, described the recent problem and the fact that the tree and the lightning strike a few years ago had collaborated (okay, maybe not consciously planned) to weaken the wires. The technician, the first one to actually finally see and understand the problem, said he knew who would do this work and he’d call him right away.

Concluding act: The above-mentioned technician showed up at the door on Sunday afternoon. 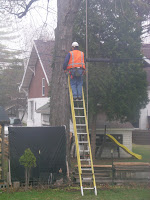 He rang the doorbell greeted Husband with, “Hi, I’m here to replace the wire that runs from the pole to your house.” Imagine further laughter here, but all out of view of the poor guy. He honestly thought that was the message. Husband took him out back, showed him the wire, and he said, “Oh! I can do that. And I’ll record the lightning strike, too. These wires get weak with repeated stresses, so we like to keep records so we know when to replace them.” He got his ladder, did the work, and was gone within half an hour.

And all was well with the wired world.

2 thoughts on “>The neverending saga of the telephone wires”