>One great reason to take my daughter to the ball park: Her pictures are far superior to mine! These are from the Donald Driver Charity Softball Game. We had a good time watching – me, watching over my box of popcorn; La Petite watching through her camera viewfinder. These incredible athletes, these huge – GIANT – men, playing softball instead of football. I even had trouble recognizing some of these gridiron stars without their helmets and jerseys! 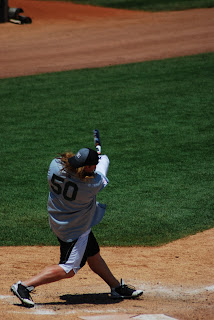 AJ Hawk up to bat – look at that hair! 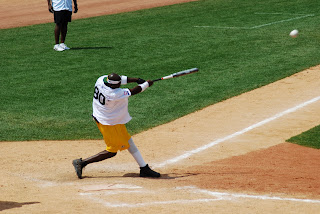 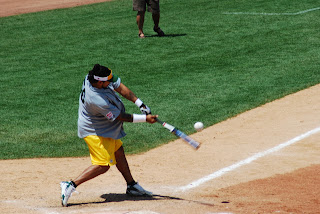 Above: Nick Barnett up to bat for the defense early in the game

Below: Barnett lets his hair down and bats for the defense again. 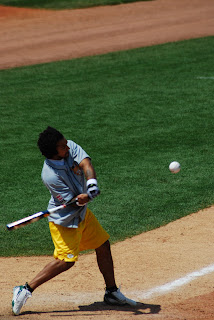 The game was called after six innings due to rain. These guys can bat, but don’t field quite as well. The final score was an outrageous tie – 38-38, I believe. We were running to our minivan for cover as the game ended; I didn’t pay attention to details!

All photos above by La Petite.