>We get to Miller Park a couple times each season. It’s interesting, the two of us, Amigo (visually impaired) and me (hearing impaired), taking it in, each in our own way. Amigo packs for the game with his armband radio and headphones. He listens to the game to get the details (thanks, Bob Uecker!) while he takes in the atmosphere and the electric excitement of the park. 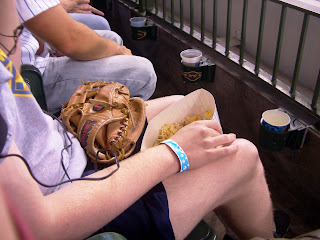 Amigo always brings his glove, no matter where we’re sitting. He doesn’t have a good perspective of how far we are from the field, so he insists (in his own autistic way) on being prepared in case we have a chance to catch a foul or a home run. He knows that we’ll be sitting on the Dew Deck, high above the loge bleacher seats, but doesn’t know how unlikely it is that a ball will fly our way. So as the innings go by, Amigo’s lap makes room for popcorn beside the glove. These are nice seats; cupholders for our refreshing beverages are right in front of us. The Dew is his; the beer belongs to someone else near us. Not mine; not when I’m driving!

Meanwhile, back at the ballpark, I take in the visual aspect. We watch games together on TV and listen on the radio, so it should all look familiar in person. Every time, though, without fail, I get this almost vertigo-like feeling as we walk out to our seats. On each and every visit to this magnificent venue I am awed by its sheer size. The place fills up as the game begins, and the crowd roars its approval of the starting line-up. 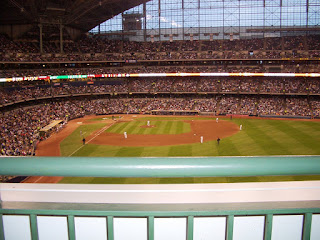 It’s not as distant as it seems in this picture; we (well, I) can see almost all the action. The only pieces I miss are the long fly balls to right field; those come directly below the Deck, and I have to count on Amigo to confirm what really happened on the field. And when the racing sausages his the warning track, we’ll cheer on our favorite sausage du jour!! Tonight, the Chorizo won.
The Brewers did, too. Look out Mets, the home team is on a roll!

1 thought on “>Summer is for Baseball: Major League Baseball”