Chuck was at a model train show recently. While he was gone, I realized I had a draft in my queue that I hadn’t posted yet. What does that have to do with trains? Read on.
It was the annual gathering of the model train club: a cookout-slash-potluck of the guys. They requested that Chuck bring his famous German potato salad. He did, but he did even better. Remember, these guys are geeks who identify totally with the main characters on the show Big Bang Theory.
From the left: Fizzbin Fruit Salad, Pickles Set on Stun, Photon Tomatoes, and the aforementioned potato salad. 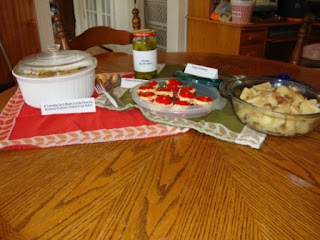 Fruit salad:
fresh pineapple, raisins, gooseberries,
Photon tomatoes:
spicy deviled egg mix (yolks only) in plum tomatoes: use the yolks of hardboiled eggs for a traditional deviled egg mix, with the addition of smokey red pepper sauce. Scoop the seeds and pulp out of the cherry tomatoes; fill with the egg mixture and top with the tops of the cherry tomatoes.
Pickles set on Stun:
pickles marinaded in brine from Marzetti’s hot pickled yellow peppers.
Next year I think he’ll bring something that requires a pizza cutter so he can bring his new one.