Imagine a busload of people who like Car Talk, get the jokes on Wait, Wait, Don’t Tell Me, and know the difference between Michael Feldman and Michael Perry.* This is a bus trip of people who are polite to each other, make friends readily, and enjoy intelligent conversation about issues that matter to you, er, them. Amigo and I took just such a trip last summer and the previous summer. Sponsored by Wisconsin Public Radio, the trip goes to tiny Bayfield, WI, where the group takes in a show at the Big Top Chautauqua.

The most recent City Council meeting seemed like it was ripe for conflict. People attended to speak for the trees, speak for the right to raise urban chickens, and support an up and coming project that will turn a former country club and golf course into a large community garden. Despite the differing opinions, all in attendance had something in common.

What do these three have in common? I’ll give you a moment to think. Take a look at the OFA office windows while you’re contemplating. 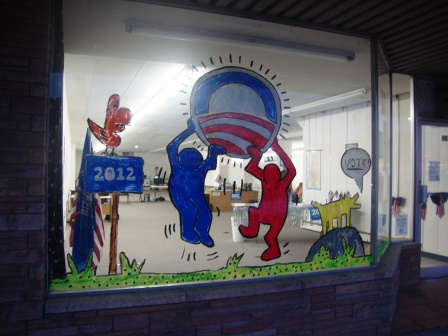 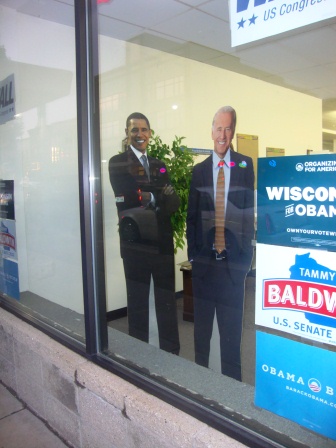 Come on in and pose with the cardboard cut-outs!