>The first snow changes everything. Earlier in the week, I was outside without a jacket. Now I’m pulling out the gloves and scarves and making sure my car is equipped with its snow brush and ice scraper. My students were so excited they asked if I would turn out the classroom lights so they could stand at the window and watch the snow fall. I said yes. I recognized the excitement of the first snowfall and let them express it. The clouds were so heavy that it was quite dark outside, and we could see the large flakes drifting to the playground where they became more slush than snow. The kids were amazing; when I turned the lights back on and asked them to settle, they did so calmly with satisfied smiles on their faces. Most are native to Wisconsin; snow is nothing new. But they still feel a thrill when the first flakes fall and the landscape changes. I understand; I feel the same thrill. 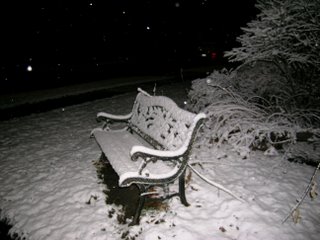 By the time I got home, the snow was sticking to everything. After supper, it was completely dark outside. In the view out front: the bench where Amigo often waits for his bus is covered. 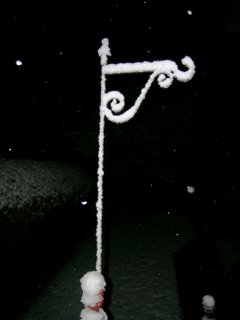 In summer, this shepherd’s crook held my lovely ivy geraniums. Now it has its own beauty, with the white snow on its black iron finish.
But below you’ll see the evidence of my neglect. This is what happens when I don’t get the deck furniture put away in time. 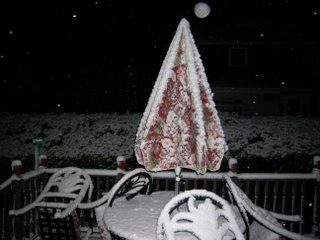 Ah, well, I’ll brush the snow off, bring in the cushions, and dry them off. All will be well. Winter, in its own loveliness, is here to stay.

3 thoughts on “>The first real snow”