The first time I heard the term “sound bite” was during the presidential election between Bill Clinton and George H.W. Bush. Journalists, especially those on TV and radio, found ways to pull out a small snippet of a candidate’s speech and use it to form the basis of a news story. Remember these?
Read my lips: no new taxes!
It’s the economy.
…a kinder, gentler nation.
Save Social Security!
Protest signs have a similar challenge: not much space, the need for a quick message, one that a driver can read at a glance and continue driving safely. Amigo told me he was rallying for his teachers: those who had taught him in the past and those who were his teachers now. We talked over simple slogans, and he decided to include a little Braille to remind people that all students, no matter what their needs, must be educated. He used his Perkins Brailler to show me how to write SOS correctly, and we were ready. He knew which side of the sign to face out because he could feel the stick & duct tape on the back. 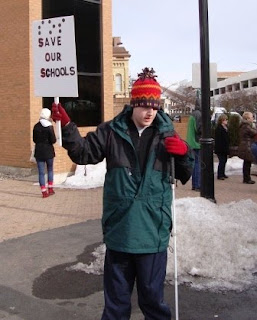 There’s a classic saying, “If you think education is expensive, try ignorance.” The signmaker below has a variation on that theme – a variation that also points to new governor’s insistence that Wisconsin is “Open for Business.” How he thinks a strong business economy can exist without educated workers is beyond me. But that’s another post… 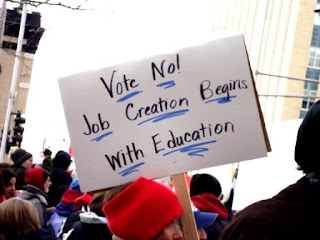 Anti-bullying programs and zero-tolerance policies for physical, verbal, and cyber bullying are common across the country. In many states, such policies are mandated by the Department of Public Instruction. Gov. Walker’s method for dashing off a divisive and devastating bill that guts the rights of many is just that – bullying. Questions? See below. 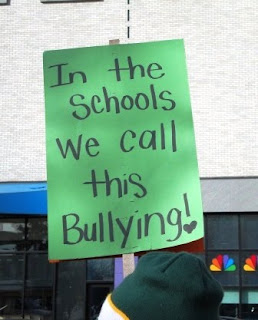 Sound bites or protest signs, they work in a similar fashion: quick to make a point, easy to understand, easy to remember, and the potential to provoke a more in-depth discussion. Let’s hope the bully decides to mediate soon so that Wisconsin workers don’t need many more signs.