Goal –> to keep my mind off staff meeting this afternoon, which could have been worse, but also left a kind of bad taste in my mouth
Goal –> to avoid repeating what others have already said about Favre, and add my own perspective
I wore my Favre Celebrity Softball Game t-shirt to school today. I posted yesterday’s newspaper with its headlines and photos outside my classroom door along with two rather trivial Favre posters. The posters attracted a lot, and I mean a lot or attention from students. One was the Milk Moustache ad from right after Super Bowl XXXI. He looked like such a kid! No gray, no grin wrinkles, all clean-shaven, big grin. The other poster was an ad for Wisconsin’s champion cheeses. Favre is sitting surrounded by big wheels of various cheeses and flashing that big “I can’t believe they pay me to do this” grin. The students kept asking if the autograph on the poster was authentic. No, it isn’t. It was mass-produced along with the advertisement.
Both posters were discussion-starters, though. It was fun talking with kids who have been alive less time than Brett has been playing football. Oh, my goodness, that sounds scary! But it’s true. There is a whole generation of fans — no, two generations of fans! — who remember only one quarterback on the Packers.
So just for fun, here are a few you won’t see on ESPN. 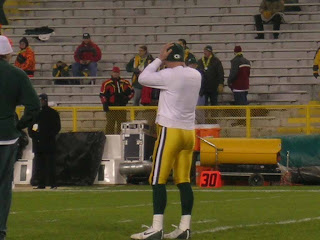 –warming up before a game on a sunny day 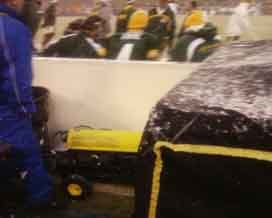 — staying warm during a game on a very snowy day 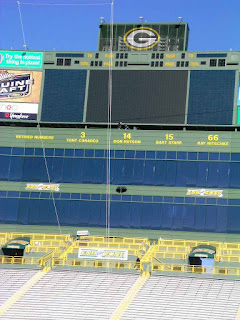 –and the answers to yesterday’s question. If the picture is too small to read, the numbers retired by the Green Bay Packers are 3, Tony Canadeo; 14, Don Hutson; 15, Bart Starr; 66, Ray Nitschke. Not pictured here: 92, Reggie White. Soon to be added: 4, Brett Favre.

photo credits all go to Husband, who had the opportunity to photograph some memorable moments while working weekends 🙂