>We’ve redecorated, courtesy of Amigo. I’ve actually had these up for several weeks, but I didn’t have a picture. Amigo thought the picture would make a good Wordless Wednesday. Oops, I just added words!

These are Amigo’s awards from school! They included participation awards and special recognition, too. The plaque on the left is for the highest point total for a beginner in Forensics. the plaque on the right is a sportsmanship award for wrestling. 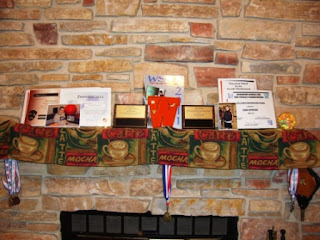 Here’s the close-up of his school letter. He earned the letter and pins for track, drama, and forensics. Impressive, at least in my view! 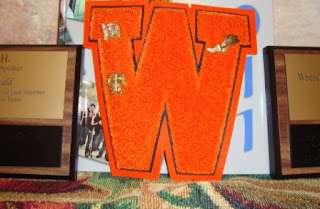 I’ll keep them up until they get dusty or until something else comes up. It’s fun to look at evidence of his success every time we come in the room. All in all, he’s a pretty awesome teenager.