It was Monday night. Not dark and stormy, although there was a snowstorm waiting in the wings. Here in Wisconsin, we watched one school district after another declare their schools closed in advance.

Meanwhile, in our neighboring state of Iowa, the presidential primary season has officially begun. It’s the night of the famed Iowa Caucuses. There, in the heart of the Midwest, real results – not estimates or polls! – will emerge.

So while I’m relaxing in front of a series of Tiny House Nation episodes, I’m also prepping for the incoming storm. My laptop is plugged in and charging. My fitbit (with its vibrating alarm) is plugged into the laptop and charging. My phone will go on its turbo charger later. The storm promises to move in midday tomorrow, so I’m not too worried about overnight power outages.

Meanwhile, back in Iowa, a correspondent for The Broad Side has been posting updates and pictures. I watch the numbers change in her posts. Hillary – 54; Bernie – 29; O’Malley – 3; Undecided – 5. They caucus some more. Hillary – 57; Bernie – 34. Based on those numbers, the location I’m following assigns Hillary 8 delegates for the Democratic Convention and Bernie 5 delegates.

A friend posts on Facebook “Schools are closed tomorrow!” We know it’s official when we see it on at least three news channel crawls and on the district’s official web site. Conversations on social media range from “6 inches? We’re shutting down for 6 inches?” to “Thank goodness, the administration is erring on the side of safety and caution.”

Meanwhile, back in Iowa, someone posts a picture of this. 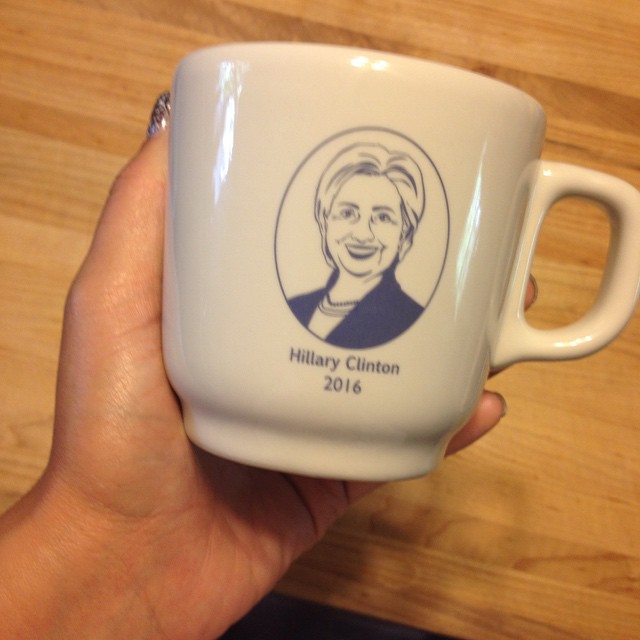 This would go well with my Obama mug, wouldn’t it?

As for schools closing, the major factor isn’t always how much snow falls. It’s more about when the snow falls and whether the plows can clear the parking lots, sidewalks, and nearby streets. An overnight snow can mean a two hour delay while the maintenance crews plow and shovel and blow snow. If a storm drops 5-6 inches starting at 3 AM, it’s not so easy. Tuesday’s storm may drop 6-12 inches, all starting around noon. Folks, in reality, starting a normal school day and then having to send kids home early is a nightmare. Chaos. Confusion. 6 inches in itself may not seem like a catastrophic snowfall, but the timing is everything.

And meanwhile, I’ll watch the snow fall from the safety of my home.

1 thought on “Meanwhile, back at the Caucuses”

Leave a Reply to Green Girl in Wisconsin Cancel reply