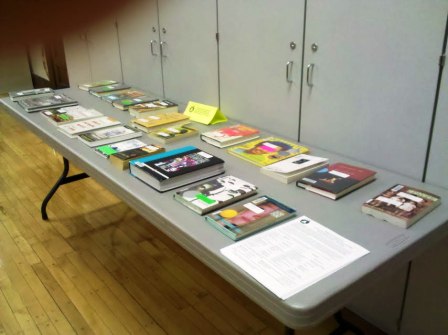 A new table has turned up in our hallway. I happened to be in the building for a different reason (I’m on sick leave recovering from surgery, remember?) so my chauffeur (Petunia) and I stopped by the table to pick up lists. I do have time for reading as I heal, so I might look into getting a few of the titles I haven’t yet read.

But wow. There are a lot of books that I haven’t read on the list . On the list for grades 7-8, I’ve read five out of the ten titles. In those for grade 9 and 10, I’ve read one, exactly one, out of the suggested sixteen. In fact, I read it and reviewed it and found it fascinating. Life as We Knew It by Susan Beth Pfeffer — here’s the review.

None of the previously listed books are here, so I’m guessing those already approved might remain part of the curriculum. I’ll start with those I know, and then see what I can find on Paperback Swap and at the downtown library.

The Wonderful Wizard of Oz is on my Kindle. Now I have motivation to read it.

Where the Red Fern Grows by Wilson Rawls is a classic piece of literature in many categories. I remember a gifted sixth grade reader asking to borrow it from my shelf, and then asking a friend to reminisce. “Remember when we were in third grade and Mrs. Sippi couldn’t finish reading this aloud because she cried?” Red Fern belongs on the “Read it with a box of tissues” shelf with Stone Fox and Walk Two Moons. The story is wonderful, and the setting is just foreign enough to my local kiddos that it will keep their attention.

The Hunger Games by Suzanne Collins is a popular favorite. Personally, I might leave this out of books to read in class because so many young people are picking up the trilogy and seeing the movies.

Hoot by Carl Hiaasen and Holes by Louis Sachar have been “listed” for years. Both are excellent, and fairly easy reads for grades 7 and 8. Hoot shows a typical Hiaasen environmental bias and is a lot of fun to follow. I’ve read this aloud to fourth graders (who hadn’t seen the movie) and it was a hit. Holes? Brilliant. Louis Sachar braids present with historical and a hint of supernatural and somehow it all comes together seamlessly in the end. Fans of Holes might also enjoy Small Steps, also by Sachar, which follows two of the inmates from Holes into their life after Camp Green Lake. I read Small Steps to my 6th graders, most of whom knew Holes, and they took to it like shovels to snow. Um, poor analogy there, sorry.

Lemony Snicket’s opening salvo in his Series of Unfortunate Events also appears here, and my reaction is similar to The Hunger Games in that so many students have already read this and its many sequels. Lemony Snicket has a lot of fun with language, and that leads to a humorous telling of otherwise disastrous tales. The Bad Beginning is short and the plot is simple, leading to a quick and relatively easy read. Since this is the first in a lengthy series, it offers a chance to get readers interested in the characters and the story structure and read more of the same. That would be the strongest reason for me to assign The Bad Beginning for students to read.

Between Shades of Gray by Ruta Sepetys

The Boy in Striped Pajamas by John Boyne

The Boy on the Wooden Box by Leon Leyson

The Invention of Hugo Cabret by Brian Selznick

The Thief Lord by Cornelia Funke and Christian Birmingham