>I picked up this tool at a grill specialty store. It’s a grill “basket” for vegetables. It has slots in the base to let the air (heat) circulate; the veggies cover those in this picture. We drizzled olive oil and a little garlic in the bottom, then sliced the vegetables thin and placed them in the basket. I had zucchini squash, three kinds of bell peppers, onions, and red potatoes. Anything else? The basket was really too full, but somehow, it worked. The herbs on top (oregano, thyme, basil) gave the veggies just enough spice to complement the smoky flavor. 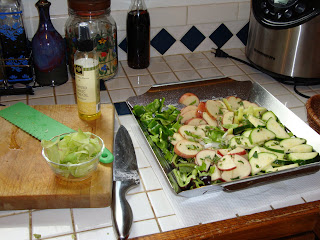 On the side — or the main dish, if you’re a carnivorous type — were beef kabobs. The meal was pretty good. I wish I’d put the vegetables on the grill a little earlier so they could cook longer; they were a little underdone. Maybe if I’d had a lighter layer in the basket they would have cooked through a little better. 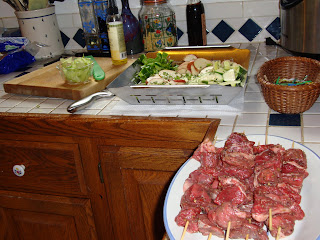 The leftovers (there were a lot of leftovers!) became a soup a few days later. Diced up small, tucked into a beef broth in the crockpot for several hours, a few ingredients added for fun (and to empty the vegetable tray), and we had a second meal from the same starters. 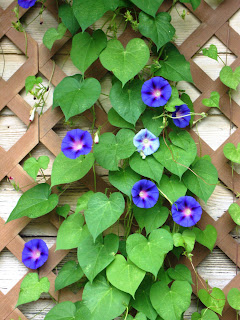 Remember the climbing plant? The one I couldn’t identify? The vine I thought resembled beans? It is, indeed, a morning glory. Or two, or three. The wild neighborhood rabbits have not nibbled.