When Flat Stanley arrived in my mailbox from Irving, Texas, we knew one place we needed to go: Lambeau Field. Chuck folded Stanley into his wallet and headed off to work.
Stan’s first stop was the Lombardi statue at the entrance. He held onto Vince’s left shoe; that first step would be a doozy. 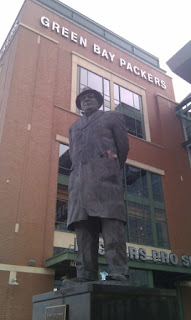 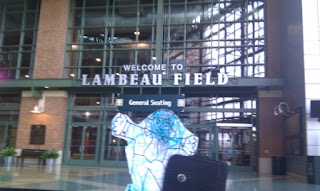 Stanley’s first stop was the Green Bay Packers Hall of Fame where he saw the collection of Lombardi trophies. He felt a lump in his throat as he viewed the most recent addition to the collection, the trophy from last season, Super Bowl XLV. 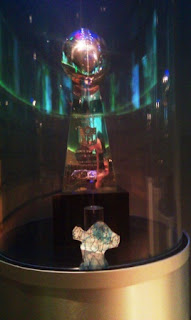 Then Stanley considered his choices. Locker Room or Field? The locker room was locked, so on to the field it was. 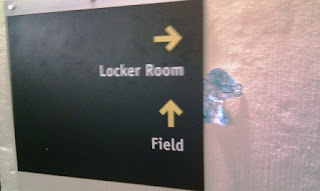 “Wow,” thought Stanley. “This is hallowed ground, not frozen tundra.” 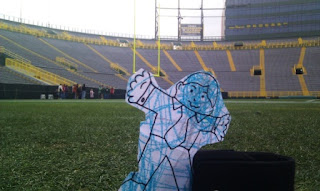 Flat Stanley had the good fortune (and the connections) to sit on the sound board during the evening show of Larry McCarren’s Locker Room. The studio audience overflowed the place for this guest: Aaron Rodgers himself. 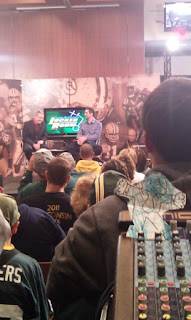 Stan was exhausted after his Green Bay adventures, so he climbed back into his envelope in Chuck’s wallet and went to sleep. After all, tomorrow would be another day. There were places to go, people to see, and adventures galore awaiting his flat little self.