Originally posted in 2009. This year I didn’t plant zucchini, and I still have plenty. My coworker brought in a grocery bag full from her over-producing vines. I took two, and she offered more. Here’s the story of the Origins of Zucchinis.

Once upon a time, a very long time ago, about last May, there was a patch of dirt behind the garage. Mom dug in the dirt and called it Soil and planted many, many seeds. Then she watered, pulled out weeds, watered, pulled out weeds, and watched with pride as the many shades of green stems and leaves emerged from the ground. The stems and leaves and vines grew and grew until a forest grew all around and it became the place where the wild things are. Wait, that’s another story. 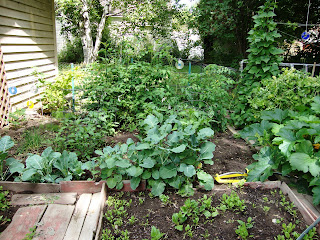 It was eventful along the way in that little patch of vegetables. A wood chuck paid a surprise visit.  A rabbit squeezed inside through a small opening. Mom fixed the fence and hung old computer CDs to help scare away the critters, hoping all along that the bees would still come by to pollinate the squash blossoms. Pollinators, rumor has it, are not afraid of Windows 3.1. 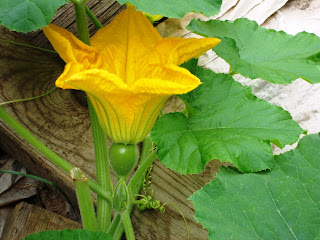 What’s a squash blossom? Well, honey, it’s this flower: the one that magically changes into a baby zucchini if the birds and the bees stop by at the right time. Ahem. Let’s stop right there. There’s a fiddle tune called Squash Blossom Reel, I think. Let’s look for it tomorrow on YouTube. 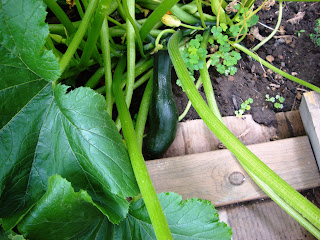 Well, little one, after the big orange blossom fades and falls off, the pretty green squash will grow and grow until it’s so long that Dad calls it a baseball bat and Mom takes ahold of it and twists it gently until it comes off the vine. Then she’ll bring it in the house, clean it up, dice it up, and add it to supper. And lunch. And make it into bread. And grate enough to fill the freezer.
Maybe the question shouldn’t be where does it come from, but where will it go? It’ll go in the zucchini bread, in the salads, in the stews, in the freezer, and it’ll end up in…. No, forget I said that, honey, and just go to sleep. Once upon a time, there was a little one who asked Mommy all about zucchini….

2 thoughts on “Encore: Mom, Where does Zucchini come from?”