I almost feel like I should jump into Grandma Daisy voice for this post, but it’s not necessary. I’m old enough to remember and explain it myself.

It was a long, dark, and stormy campaign. We Wisconsinites were getting tired of the negative ads, the name calling, the nasty back and forth in the race for one of our Senate seats. In fact, I don’t remember the two candidates who were throwing their campaign war chests into battle. I just remember wishing I had a television that had a newfangled remote control with MUTE button.

Then there was Russ Feingold. He wasn’t wealthy. His supporters were the everyday middle class folk who could donate small amounts. Russ did have a major advantage: a sense of humor.

Feingold’s commercials were made with a home video camera. His script was largely improvised – opening a closet door and saying, “Look, no skeletons” was one highlight. While the front runners tore each other to pieces, Russ found an endorsement that people would remember. He held up a tabloid style newspaper that proclaimed “Elvis Endorses Feingold.”

I remember when Russ Feingold was the only member of the Senate to actually read hte Patriot Act – and the only Senator to vote against it.

I remember when Russ Feingold created a truly bipartisan bill with none other than Republican John McCain. When someone refers to McCain-Feingold, people still recognize the names behind bipartisan campaign finance reform. If you doubt me, ask Alex Trebek. 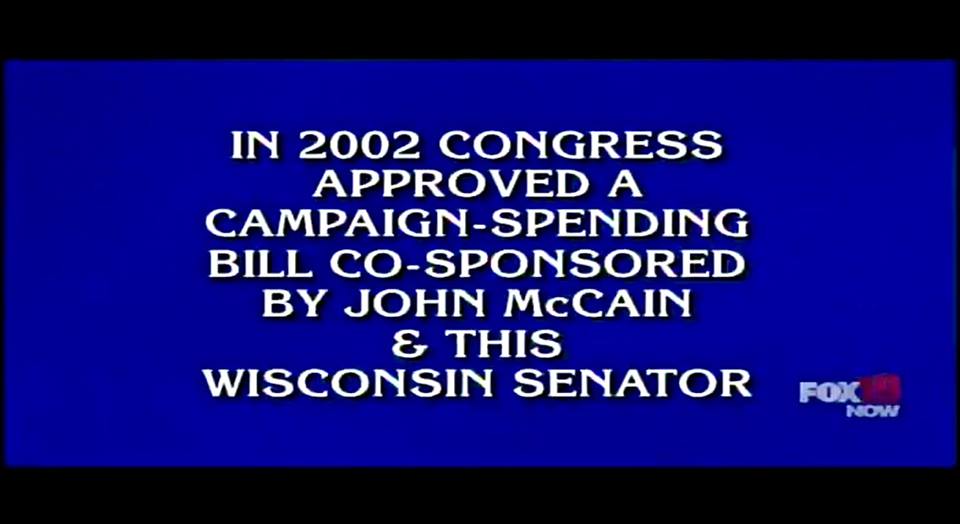 Who is Russ Feingold, of course.

Russ is a man of integrity and intelligence. If he’d go on Jeopardy himself, I predict a win. In fact, I look forward to helping him win in November of 2016. Blue suede shoes or basic Oxfords, Senator Feingold is on his way back to Washington.