Many schools entered Phase One of Bing’s “Our School Needs,” but only 15 are finalists. You can register and vote for them here. They’re all worthy projects, and there is one in my home state of Wisconsin. Aquinas High School in LaCrosse, WI is seeking funding for a new auditorium. If you read their story, you’ll see why they’re asking for help.
Aquinas is not the only school suffering from budget cuts. When the economy is bad and local taxpayers are suffering financially, the average Joe or Josie on the street sees schools as money pits. The same average Joe or Josie might not know that central administration has been cut drastically, combining two positions into one in several cases. Joe and Josie also don’t know that energy costs have been cut by not turning on the heat until students arrive, disregarding the teachers who’ve been working in their cold and drafty rooms for an hour already. Josie and Joe might collect box tops and soup labels and think they’re helping, but fail to realize that each UPC code earns only 10 cents – not even enough to buy a #2 pencil.
Bing will divide a quarter-million dollars between four winners. The top vote-getter will receive $100,000, and the next three will get $50,000 each. Voting started yesterday and continues through Sunday, November 7, with winners announced on Tuesday, November 9.
PTA and booster club fundraisers can only go so far. Supporting Bing’s donation project will help a lot. Supporting DonorsChoose.org is another way to fund a specific project that will make a direct impact on students and their learning. 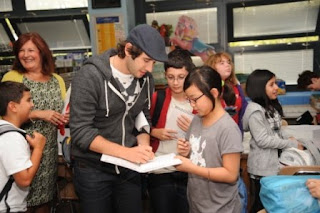 Josie and Joe may not understand the need for stronger funding, but Josh does – Josh Groban, that is. Here he is signing autographs as he dropped off instruments and sang in a chorus class at a middle school in Queens, NY. This is a great way to call attention to the project and support the arts in schools. Thanks, Josh! Now would you have a talk with Joe and Josie about school funding?
I wrote this review while participating in a blog tour campaign by Mom Central Consulting on behalf of Bing and received a gift card and DonorsChoose.org giving code to thank me for taking the time to participate. I plan to apply my DonorsChoose.org code to my own project here. Please consider passing the word; it’s another very direct way you can help students learn.