>Food In Jars, a canning blog, is one of my regular reads and go-to sources for information. A month ago (was it really almost a month ago?) blogger Marisa put up a post asking readers where they stored their goodies after canning them.

I’m a beginning canner, so there aren’t many cans on the shelf yet. The cupboard, like almost everything in our home, has a history. 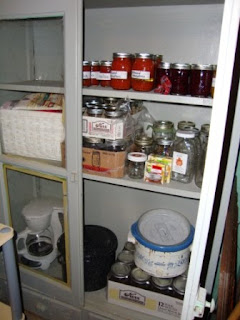 This gray cabinet resides in our basement along an inside wall. It has glass fronts on the main lower shelving, and solid doors on two smaller sections on top. When we found these in the basement, we presumed they had been part of the original kitchen or dining room, probably lining the walls. The previous homeowners, most likely practical and frugal sorts, had moved them downstairs rather than throw them in a dumpster.
Last summer a young couple knocked at our door. Somewhat sheepishly, the woman told us she had lived here as a child and as long as she was in town, could she see the house again? Of course we invited them in. She described many changes beyond those we’d made, and told us that the gray cabinets had indeed sat in the small dining room, but they had lined up at a 90 degree angle from the wall at the bathroom door, making a sort of short hallway.
Well, now they’re in our basement, serving a good purpose. My canning supplies and the resulting jars are sitting behind the glass doors, looking delicious. I expect to fill the shelves a little more each year as I learn new skills and get more adventurous with the canner and food in jars.

6 thoughts on “>Where do you keep your foods in jars?”