I asked the same question at first. Amigo explained the playing techniques, but I still couldn’t picture it. I looked it up online and found out that goalball was developed after WWII as a sport for blind veterans. Today the unique game is part of paralympics, and many schools for blind students have a competitive team.

Amigo’s team lost a close one, a heartbreaker of a game in overtime, to eliminate them from the conference competition. The coach arranged an informal scrimmage with the team from Iowa so that both teams could play a little more. These pictures are from the scrimmage.
First: Amigo is not sleeping. He is in ready position with his arms and legs stretched out to cover as much space as possible. If the ball comes his way, he will block it. 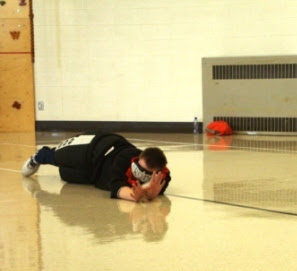 You may have noticed details about the gear. Players wear hockey shorts, the padded kind, along with knee and elbow pads. All players also wear covered goggles or sleep shades to eliminate any residual vision they might have. The goggles prevent a player with some vision from having an advantage over a totally blind competitor. All players compete totally sightless. 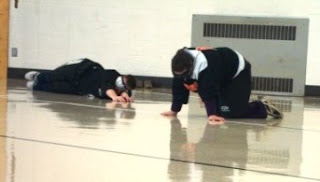 The ball itself is soccer ball size, hollow, with bells inside it. Players track the ball by listening intently. They keep track of their positions on the court by calling for a “tap” – a player to slap the floor. In this photo, Amigo is the right wing. The girl in the middle is the center. Before he rolled the ball, he called, “Center Tap!” and she slapped the floor so he could hear where she was and plan his throw. All this happens quickly; the team must get rid of the ball within ten seconds. 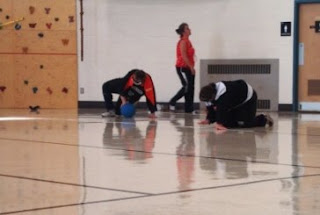 Here goes the throw – or more precisely, a roll. If the ball appears a bit blurry, that’s because Amigo rolled it quickly. In fact, he rolled it so low and so quickly that the bells were effectively silenced – a technique that makes blocking difficult. He scored on this one. Yeah, Amigo! 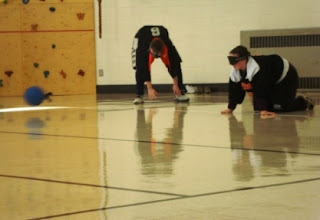 Goalball. It’s unique, it’s fun, it’s competitive. And when the competition is over, the team members socialize with an awards ceremony and a dance. The tournament? Great. The opportunity to socialize with other teenage blind athletes? Priceless.