>The killing frost came. I harvested the last beans, tomatoes, peppers, and parsley. I pulled down the bean vines, yanked out the pepper and tomato plants, set aside the wire cages for spring. The second rain barrel is emptied and up-ended; I’ll use the main one for one last soaking, then open its drain and turn it, too.

Meanwhile, it’s fall, when the vegetable gardener’s mind turns to — spring! We’re preparing a new plot for tomatoes. Last year, the tomatoes grew too big for their spot, outgrew the wire tomato cages, leading to broken stems and shading the pepper plants behind. I moved them, and found another not-so-good season. No tomato blight here, thank goodness, but I planted them too close together and they didn’t have enough sun to really flourish. Solution: Prepare a new plot in a sunny location for the tomatoes. Decision: start it now.

This is the layered, no till, often called “lasagna” approach. The lowest layer is either newspaper or cardboard. I had boxes galore, so I flattened them and spread them out. The area is bordered by boards from an old deck; they’ll hold down the boxes for now and designate the sides in the spring. If I decide on a different edging, it’ll be simple; just pick them up! 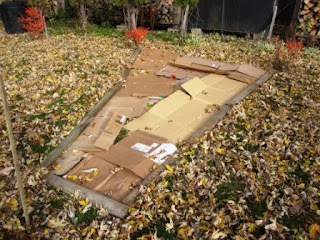 Layer two: grass clippings, mulch in progress. I’ll add a little more each weekend until it (gulp) snows. As I carried this organic material from the brush pile, last weekend’s nasty chest cold reared its ugly bronchial head and I had to go inside. The first layer is enough; we can add leaves and more when we get time. 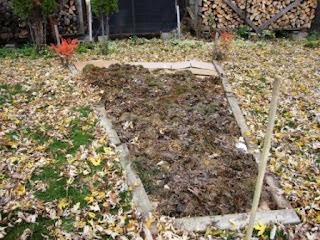 The decision next spring: To till or not to till? I’ll look it over, see how the soil weathered the winter, and decide then.

2 thoughts on “>We’ve only just begun to prepare for spring gardening!”