First: did you see the true or false quiz yesterday? No? Then go to Friday’s post first. Go ahead, I’ll wait. Guess which one (yes, one) is false.
Okay, you’re done now? Here’s the list again, but with commentary, of course.

What did Daisy do recently?

1. Amigo and I got well-deserved haircuts.
Yes, we did. We were both overdue, too. I feel lightheaded but well-groomed now that the haircut thing is done.
3. Plumbing and electrical inspectors stopped by to check on the recent remodeling project.

Yes, they did. They were quick and efficient, and I didn’t have to wait around home too long. That’s good, because Amigo and I needed haircuts.
4. Amigo and I went out to lunch at a tiny hole-in-the-wall grill downtown.
Funday Friday! Yes, we like to go out to lunch on Fridays in the summertime. Our favorite places are locally owned, smaller restaurants or even diners. Today’s was very tiny; most of their business is through catering and through the pub next door. Sound good? Yes, it was.
5. La Petite took care of Krumpet (the bunny) post-surgery.
Yes, indeed. Krumpet the adorable was spayed yesterday.
6. I made half-caff coffee: decaf fair trade from last week’s farmers’ market, full-caff Door County coffee, chocolate raspberry truffle flavor.
Yes, surprising though it may be, I made half-caff. It was delicious. I sometimes drink more coffee during breaks than during the school year, so I often cut down on the caffeine by brewing half and half.
7. I cleaned the bunnies’ litter boxes.
It’s almost a daily chore. It feels so good when that’s done. The house smells a lot better, too.
8. I chased a bluejay away from my garden. You’re welcome to the worms, Mr. Jay, but leave my seeds alone!
I suspect there are plenty of worms to keep the soil healthy. But why is there almost no spinach, but lots of lettuce? Who’s munching on the beans, but leaving the peas alone? BlueJay, can you tell me that?!
9. The rain barrels remained full, despite several days of sunny weather.
Even though I used the rain barrels to rinse the litter boxes (see #7), they’re still filled to the brim.
10. I wrapped up nine packages for Paperbackswap and mailed them all!
Yes, yes, and yes!! Nine packages containing ten books. Two were audio books, worth two points each. When all arrive at their destinations, I’ll have 12 more credits with which to order books!
Ah, but I hear you. “Daisy, what happened to number 2? You’re a teacher; you can sequence and count and make accurate lists!” Yes, I can. Here’s number 2, the statement that was false.
I did not uproot the rhubarb. I am, however, working on transplanting it. At the moment, it is surrounded by raspberries. Rather than continue pulling out raspberry vines, I’m aiming to move all the rhubarb to a new home. We moved one plant already, and it’s doing well. Here’s the new home: 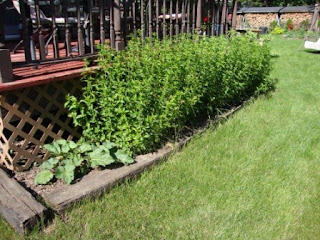 You can see one rhubarb plant on the left. The rest is mint. Tall, spreading, incredibly aggressive mint. But what’s that in the middle? There are three or four of these stray plants in the middle of the mint. 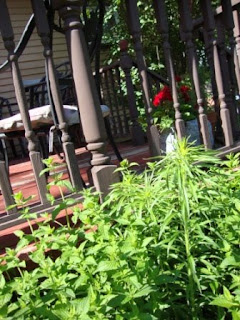 It vaguely resembles a lily, but the lilies La Petite put in are much, much shorter. This tall piece has no flower, either – at least not yet. 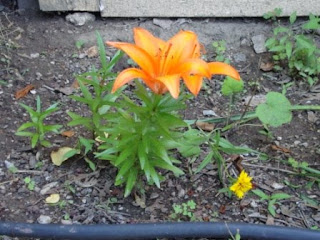 Well, I gave in. I took it all out. Mint, the mystery plants, and the remaining sickly looking hollyhocks. The rhubarb is hanging out all by itself now. Soon, it’ll have friends. And I will have lots of rhubarb for cakes, quickbreads, muffins, crisps, cookies… 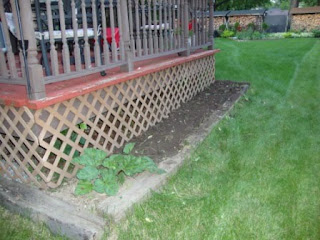