Skip to primary content
When La Petite’s phone rang, it was the mother of a friend. She and her youngest two children had come across five domestic bunnies that had been abandoned at a construction site near a local bike trail. They went back with lettuce and a large box, lured the furry ones, brought them home, and called The Bunny Whisperer, a.k.a. La Petite.
We knew what to do, so Chuck and I joined her. We gathered two cages with litter, hay, and pellets for each cage. La Petite knew where we were going, so she drove. When we pulled into the driveway, Friend’s Mom and two kids in pajamas led us into the garage where she’d set the box.
Five full grown domestic rabbits were in the b
ox. Two were harassing the others, so Chuck picked up those two first and looked them over closely. “Yep. Boy bunnies. Let’s separate these from the others.” We put the two males in one cage and the three females in the other, and they calmed down significantly. All five started to nibble on the hay and pellets, and they even found the corner with litter and used it appropriately.
Four looked like they may have been related or from the same litter; the other was a lop-eared character who didn’t resemble any of the others. He was either a major case of recessive genes or was unrelated. Cute, though. They were all cute, even though they were incredibly dirty from their adventure and trauma.
We left them settled for the night, and La Petite made arrangements to help Friend’s Mom take all five to the Humane Society the next day. When they delivered the bunnies, La Petite reported to me that all five looked cleaner and they were eating well and (are you sitting down?) at least two of the three females were pregnant. We were further appalled.
We’ll never know why the owners dumped the bunnies. Maybe realizing the males were mature was too much to handle. Getting them neutered could have been too expensive. Maybe the owners realized that not only were the males mature, but the females were expecting. If five bunnies are too many, five plus two litters of babies would be overwhelming.
The girls, getting a little attention 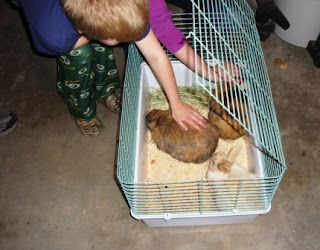 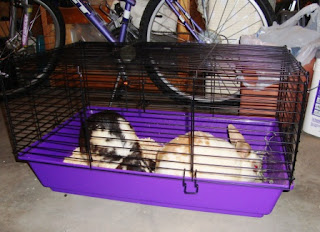 We’re grateful we’re able to make a good home for our pet rabbits: Sadie, Buttercup, and Krumpet. We love them dearly.

1 thought on “The Great Bunny Rescue”