In November, when the world was caving in on me, and all was definitely not well, I tried to bake bread. The loaf came out odd-shaped, not really edible. I replaced my yeast, thinking it had gotten old and was no longer effective. Then I made another loaf.
I had the same result. Odd shape, risen in one part, not in others. Chuck decided to replace the bread machine for Christmas. But when he wanted to discard the old one, I wasn’t quite ready. I hadn’t tried replacing the flour. Bread flour is high in gluten, and if the flour was old and past its expiration date, it might have contributed to the problem.
So imagine me now: new bread machine, works like a dream. I’m home a lot (on extended leave of absence), and I have time to make fresh bread. I decided to test the old bread maker in a one on one, loaf to loaf, scientific test. I placed the two bread machines side by side and made the exact same recipe in each one. Same recipe, same ingredients, same settings: the only variable was the bread maker. A few hours and a wonderfully fresh-smelling home later: the results. 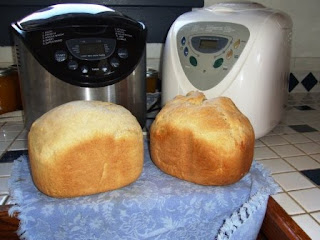 Both loaves baked up perfectly.
Now what? I have no room in my kitchen to store the extra. I don’t need a second bread maker. I’ve used the new one enough that I can’t return it.
Thoughts:
In the meantime, if we need bread, I’m ready. Don’t buy that store-made stuff, dear; mine is fresher!