My garden is under a foot of snow. The topsoil is frozen, but underneath, the little microorganisms keep living and dying and decomposing, making the soil rich and fertile for spring. There are several piles of compost, frozen solid, dumped last fall but not spread, in between bouts with gout and an influenza-like virus. We barely got the rain barrels emptied and turned so they wouldn’t freeze during the winter – spreading the compost just didn’t happen. It’ll have to get spread in the spring.
Spring. I can look to spring and think positive thoughts. I’ll still be on my extended leave of absence. I won’t be juggling planting schedules around school calendars; I can work on putting in the seeds earlier than usual, and care for the seedlings by putting them on the deck by day to soak in the sun, and bringing them inside overnight to avoid freezing.
In fact, in the middle of winter – in January! Football isn’t even done yet! – I went to Fleet Farm and bought one of these. It’s called the Ultimate Greenhouse. I don’t know that I’d call it Ultimate, but it was an inexpensive set-up that will work beautifully on my deck while I’m waiting for the frost danger to end. 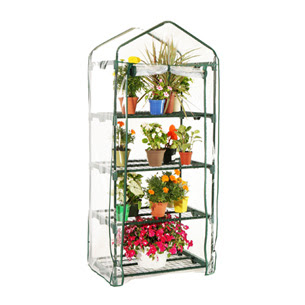 It does look handy, doesn’t it? Mine will be full of vegetables rather than flowers. It’s still in the box in the garage. When spring fever hits (April, most likely), I’ll put it together. I’m looking forward to that activity, and that’s what it’s all about right now.