The situation: decision-making time. What to cook?
The cast: starting in front, clockwise. Onion & green pepper, farm market style, already diced. Call it a planned-over if you wish. Diced tomato; leftover from tacos. Sweet corn, cooked, still on the cob; another leftover, farm market style. Bell peppers (also from the market) in green, yellow, and purple.
Ah, yes, in the back: Uncle Ben’s fast and natural brown rice.
Narrator: I sense a stir fry coming up. Or perhaps a dirty rice; I think I see the jar of Creole Seasoning snugging up close to the box of rice. Stay tuned; there’s a supporting cast coming up. 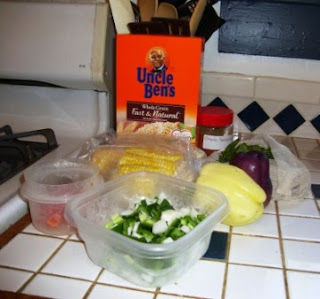 Supporting cast, all leftovers, with a slight farm market flavor:
Top container: a few tart cherries left over from making mixed berry jam
Bottom container: fruit cocktail, canned, left over from lunch yesterday
On the cutting board: one apple.
And behind the cast, sitting patiently and waiting for its turn, the crock pot Little Dipper.
Narrator: The supporting cast clearly alludes to the potential for a fruit mix. The Little Dipper could star in its own show, but it’ll meld the fruit flavors perfectly with a little brown sugar and cinnamon, softening the mix for a lovely fruit compote. 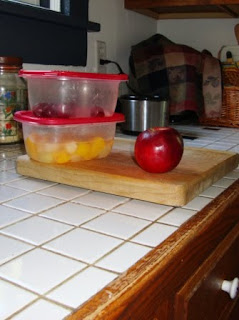 Narrator: The results? A successful raid! Dirty rice, fruit compote, all delicious, all in the refrigerator just waiting to be called out for their turn participating in a good Pantry Raid supper. 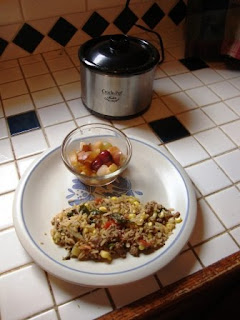