>In fall, a gardener’s thoughts turn toward the following year’s garden. Since Husband enlarged the area, I have plenty of room to play in the dirt. Plenty of room to grow a few goodies to supplement our nutritional needs and save us a few pennies on the grocery bill. But I could do a better job.

First, the layout. Think sun, Daisy. Sun. Plant the beans and the tomatoes along the north end. They grew so tall this year that anything behind them suffered.
Separate the spinach from the lettuce. Both thrived for a while, and then the spinach took over. Next year I’ll leave a barrier — my walkway (old boards from old fence) should do the trick.
New tomato supports. Now that I’ve improved the soil with several years of compost, the tomato plants are growing to five-six feet tall. If they hadn’t fallen over this year, the tomato might have resembled an NFL football player in height! (‘Tis the season. You didn’t think I’d get through an entire autumn post without mentioning football, did you?) This poor plant looks like it’s been tackled, but it held on and didn’t fumble. 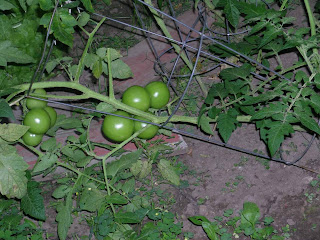 Peppers did better than ever this year. I put some on pizza, in soups and stews, on salads, and more. They’re really, really good when they’re fresh.
Zucchini? Who knows. It seems to be feast or famine, and this year it was famine.
Peas, if planted south of the beans, might do fine. The greedy bean plants hogged all the sun this season.
Cauliflower didn’t grow well. Broccoli usually does. I could plant that again.
Parsley was slow to start, but then grew steadily, which made the pet rabbits happy.

Herbs need a bigger pot. They look cute in the coffee mugs, but they’d thrive with more root space and room to grow.
Next spring, I’ll have to look back at this post to remind myself how to overcome this year’s weaknesses. Then the whole cycle will begin again, with a deep sigh of satisfaction.

9 thoughts on “>next year’s resolutions”