>One of the best posts I’ve read about making health coverage available to all: Erin at Queen of Spain talks about her day in the ER.

I saw a news feature about a new treatment for head lice; it’s safer and greener, a method that suffocates the little bugs rather than kills them. Avoiding pesticides on children’s heads? Good. Bad? It’s only available by prescription. Families I’ve known who’ve been repeatedly re-infected haven’t had health insurance. If payday was recent enough, they’d head to the drugstore for an over-the-counter remedy and hoped it would work. Meanwhile, their kids miss school until all the nits can be stripped using the proverbial fine-toothed comb.

Two kids talking on their way to recess:
Student 1: “Mrs. Teacher, do you know anything about insurance? Like doctors? Doesn’t everyone have that?”
Student 2: “My mom doesn’t. She wants to get a good job so she can go to the doctor when she’s sick.”
Two ten-year-olds bringing health care coverage into their real lives: what’s wrong with this picture? One was a middle-class child, two working parents with good benefits in their jobs. The other was a child of a recent divorce and a tough time financially. Both were hardworking children of hardworking parents. Why should one family have coverage and the other not?

Erin (a.k.a. Queen of Spain) was lucky; she could drive directly to the ER without a second thought.

Remember the signs at the Vancouver Olympics? You know, after the USA surprised Canada’s hockey team by beating them 5-3 in the first round. 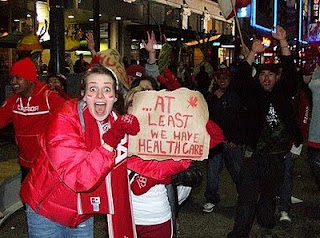 Heck, now they have a gold medal, too. When will the U.S. find its gold medal health care? Please don’t tell me that only time will tell; we need it now.

2 thoughts on “>Health Coverage for all – are you listening, Congress?”