Pears. We have pears! The Dean of Students brings plums and pears to work, and we inhale them as though they were… never mind.

Pears! I bartered a handful of rhubarb for pears from Green Girl. These delicious fruits became a big pot of sauce with cranberries in it. Yum.

I made a delicious pear sauce. It was the consistency of applesauce, but made with pears, and just a little cinnamon sugar. A trip through the food mill took out the hard pieces and the skins, and we had a simple and fresh fruity side dish.

But then – oh, come on, readers, you must know there’s a “but wait!” in this story. Pears in quantity attract fruit flies. Fruit flies fly around my kitchen and spread their fruity equivalent of urban sprawl to other rooms, too. We set a large bowl of the sweet treats on our deck. Not on the deck itself, of course not. We were well aware of tiny furry creatures that could look absolutely adorable until they steal the carrots or dip into the dill. The bowl of pears went on the almost- top shelf of my mini greenhouse shelves. They’d be safe there, right? 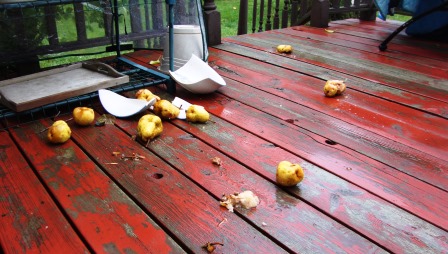 This is not the work of something small, furry, and adorable. This is the work of a furry bandit with opposable thumbs. First the compost, and now the pears? Get out of my yard, punk!