You goofed. You made a mistake, and the resolution was far from satisfactory. In fact, it stunk. We found another way around, but it meant solving the trouble ourselves by… well, let’s start at the beginning.

We made reservations as a disabled person traveling with companion, and we asked for roomettes across from each other. The reservations were rooms 7 & 8. We checked in at the Denver station and confirmed our reservation: car number 632, roomettes 7 and 8.

Luggage checked in, ready to board, we approached the car attendant with our tickets. “We’re in 7 and 8,” we showed him. He looked concerned, almost panicky. “Um, you can have 8, but there’s someone in 7. I’ll have to talk to the conductor.”

Amtrak, we reserved roomettes together to be near our son, who is blind and has Asperger’s Syndrome, a high-functioning disorder on the autism spectrum. If he needed help at any time, including at night, he could simply knock on our door (Hence the “companion” role).

We dropped our gear in Amigo’s roomette, number 8, and went to supper. Chuck and I were very upset, and Amigo was beside himself with worry – so much so that he couldn’t eat. Chuck took Amigo back to the car early, and I settled up the bill.

The car attendant and conductor had placed us at the end of the car in one of the larger bedroom units. Maybe they thought the upgrade would mollify us; it didn’t. We needed, really needed, to be near Amigo. The distance between our rooms was not acceptable. Not at all.

We felt like bad parents accepting this poor alternative. We worried about his safety and his state of mind. Would he be able to find us if he needed help? He had his cell phone, but crossing the plains as the route did, phone signals were not guaranteed. Could he find the bathroom on his own? If you’ve ever been on a sleeper car, you know how much alike the corridor appears to a sighted person. Now try it blind.

Chuck bumped into the current resident of room 7 and got his courage up to ask the man if he would be willing to trade rooms for the night. He explained the situation, and the man (grudgingly) said yes. We switched, moving all of our gear to 7 and helping him migrate to the larger bedroom at the end of the hall. We informed the car attendant that we’d traded spaces, and all of us began to settle down for the night.

Amtrak folks, Chuck and I have ridden the rails in the past. We’ve enjoyed our trips and usually had service that ranged from good to excellent. This time, the situation was far below “good” level. There were other issues, too:

All of these smaller irritations might have been easier to handle had we not been overwhelmed by the room problem. Amtrak, what happened? How will you make sure no other family encounters the same problems we did? 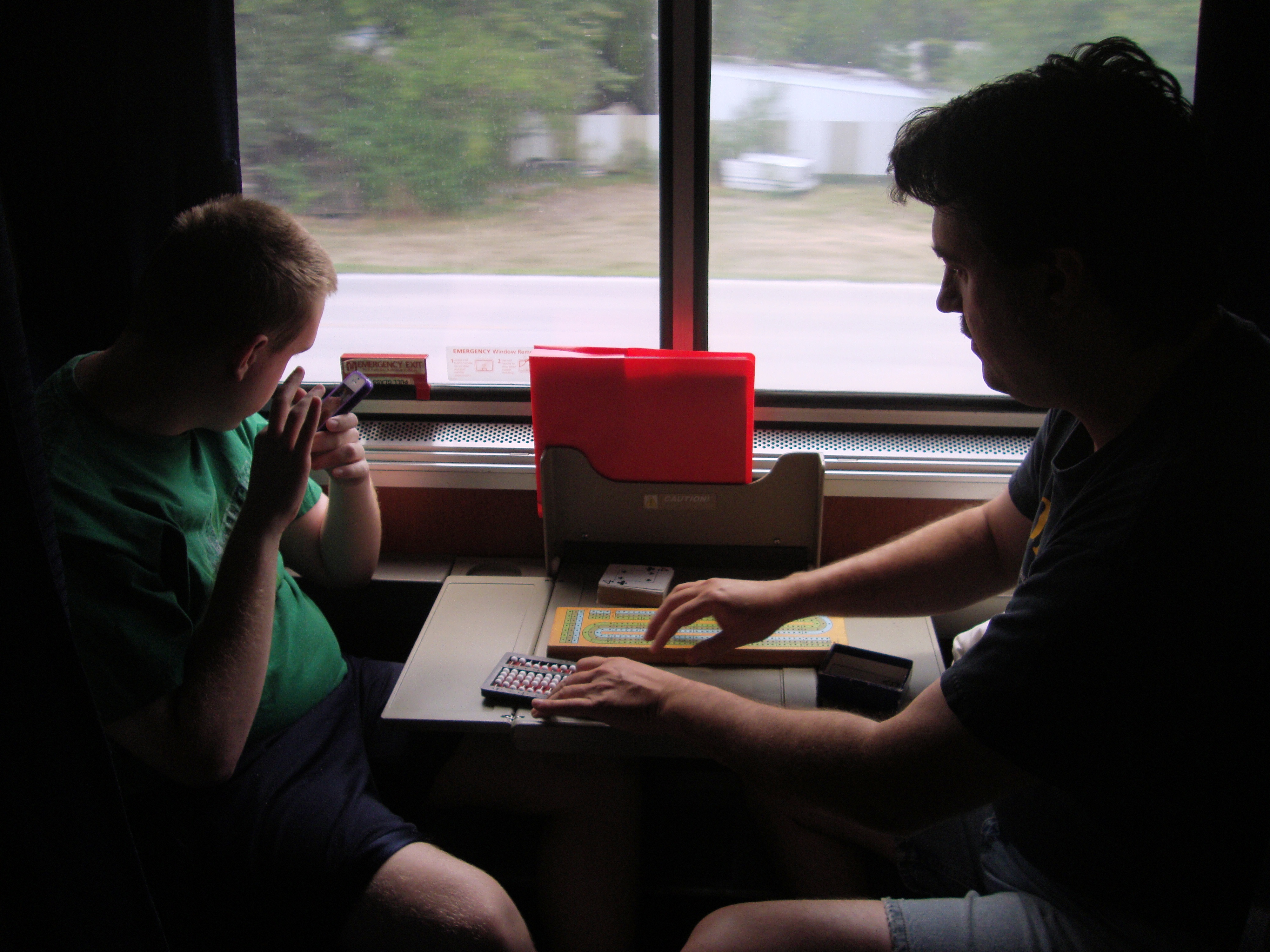 The boys in profile, playing cribbage in Roomette #8

2 thoughts on “Dear Amtrak; Customer service is on the wrong track.”