>This tree was tall. It was born as a hybrid, created to be a pulp tree for the paper industry. It grew quickly, spread its seeds quickly (we pulled out its descendants every spring), and reached for the sky amidst the other trees in our old, historic neighborhood. It fell not to a lumbering crew, but to an urban tree crew with chainsaws and ropes. 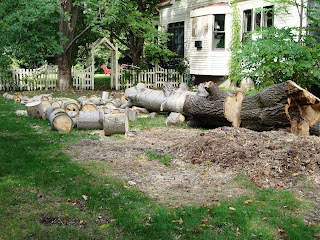 The scientist who once lived in the house across the street experimented with trees, combined the cottonwood and poplar, created a successful cross-breed for his industry and planted one in his front yard. That tree was a climber for the kids, a host for birds’ nests, and a favorite route for traveling squirrels. But in the last year or two, it was leaning, stooping like an elderly grandparent reluctant to use a walker. Every storm would drop a few branches in the yard or the street, and the family was nervous. What would it take to knock this once-stately old giant into a home? At its size, it could take two or three homes with it if it fell. 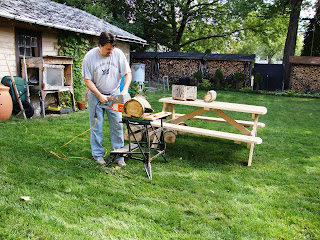 So the humans took it down before the winter winds could do it. In keeping with the legend and the memories, Chuck and I salvaged several pieces. Chuck sliced a few thin for me; I’ll take them into my classroom. My students can look at the rings, analyze the age of the tree, and imagine the history it has seen. 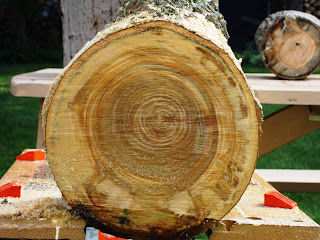 A teacher down the hall is an expert in forestry. She’s offered to look over the rings and help me interpret. In exchange, I’ll share the rich stories of the tree, its developers, and its fans.
It’s not Aldo Leopold’s old oak, but this tree is special. A few small pieces are on the woodpile, but there’s more than firewood in this gentle giant.

2 thoughts on “>A Tree with a History”