Our fair city made the transition to a city-owned, uniform, city-distributed recycling bin. Garbage already goes in a city-owned container and gets picked up by an automatic truck. It’s quick, the truck is run by one worker, and all is well with the trash world.

We opted for the smaller no-fee garbage bin. With our basic green living habits, we generate very little garbage. We take pride in the fact that the small bin is perfect and even saves us a few pennies.

Next to the little garbage can, the recycling container looks huge. It looks like it’ll hold three times the volume that the garbage bin does. Come to think of it, that’s about right. If our family misses a garbage collection day, it’s no problem. We don’t overflow. If we miss a recycling pick-up, however, it’s huge. 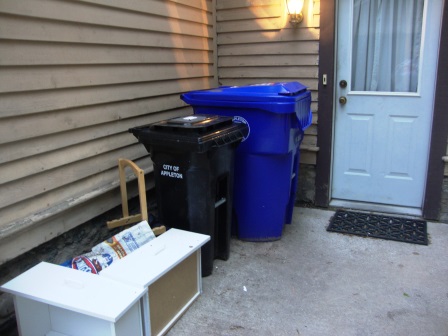 That could be my next project in green-living: minimize the cans and bottles we use and recycle. Let’s see. We already –

We can improve by —

3 thoughts on “Reduce and Recycle?”